Unusual But Super Fun Things To Do In BC For Cheap

Out-of-the-box and straight to the bank 💰 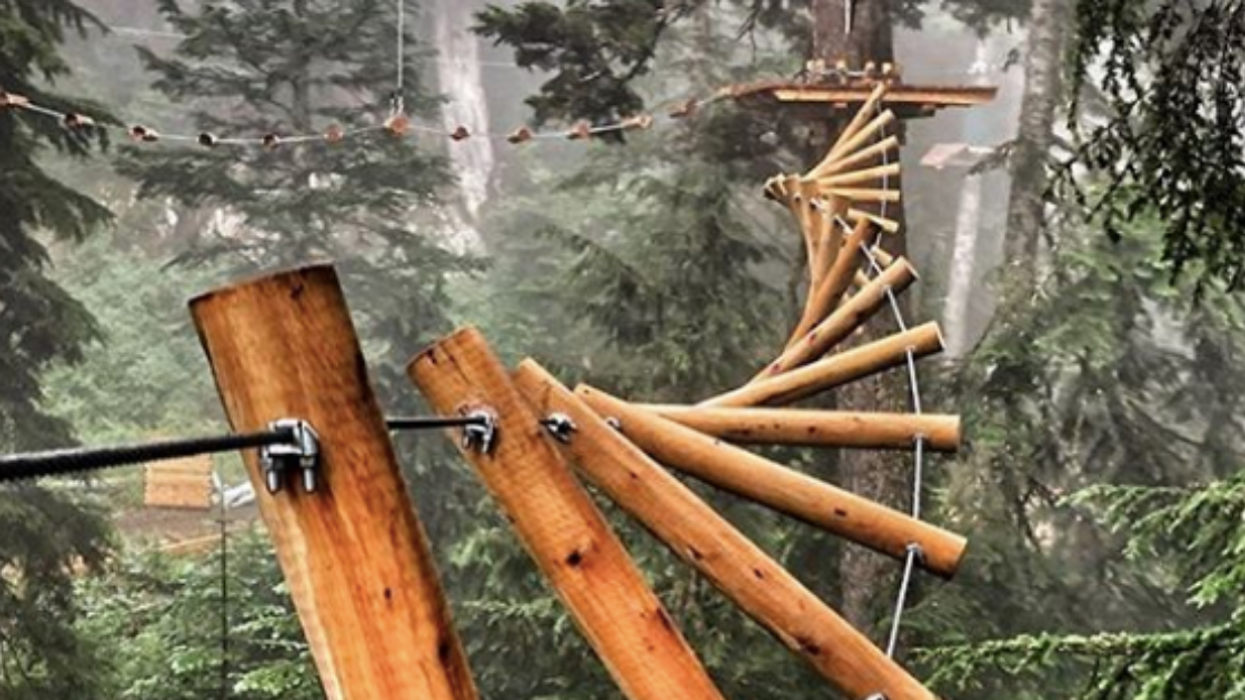 B.C. isn't known for being the most affordable place in the world. We have luxury resorts, expensive restaurants and jawdroppingly unaffordable attractions. The Capilano Suspension Bridge charges $46.95 for what basically amounts to a walk in the woods.

Don't worry, we're here to help you have fun and save money. This list is full of unusual places and suggestions that will show you an entirely different side of the province. You won't wipe out your bank account just trying to have a little fun.

So next time you're planning on catching up with friends, why not head out to one of these unusual and fun places in the province? It beats going out for dinner. Just pack some sandwiches along for your adventure and you'll be good. B.C. is hiding in its corners and pockets super fun antique shops where you can treasure hunt and step back in time! Not sure where to start? Main Street in Vancouver has a few places worth checking out and New West even has their own 'Antique Alley'.

Visit The Museum Of Anthropology Go to the MOA to see some of the Province's most stunning architecture and the definitive collection of B.C. Indigenous art and ethnographic objects. There's so much packed into this museum! If you're a UBC student, then you'll get in for free. On Thursday nights, they have reduced admission for just $10. You don't have to be an expert to be moved and captivated by a dance performance! Dance brings together artistic expression and athleticism. Compared to live music and theatre, dance performances are way more affordable and give you more value for your money.

Join In A Meetup Group

Meetup groups are where you can go to meet new friends who share your hobbies and interests. It's kind of like joining a club. Whether you want to go out to a comedy show with a group of people or make some new running buddies, you'll find the right Meetup group. If not, then just start your own!

A weekend getaway can be expensive. Bring the costs down by inviting a whole group of people along. You can still have the getaway you want but then you have a whole group of friends along with you for the experience. This is a total win-win! Trivia nights make going to the bar or pub way more interesting. There are a ton of places across the province that host themed trivia nights where you can really nerd out. Just don't get too competitive, everyone's there to have fun!

Play Tourist At The YVR Airport No money, no problem. You can still head out to the airport for an adventure! Watch the planes from the viewing platform, grab lunch from the food court and see the public art on display like The Great Wave Wall made from cut glass. You can even hit the outlet mall on the way back!

Pick Out A Pound Of Clothes At The Rag Machine This quirky thrift store is accessible through the alley behind F as in Frank on Main Street. Hunt and sift through their bins and racks to discover your next favourite thrift or vintage piece. You can pay for clothes by weight, so it's a totally unusual and rad experience.

The cannery is the main tourist attraction in Steveston, but it's really worth checking out. The Gulf of Georgia Cannery National Historic Site was built in 1894. This unusual spot is an interactive and immersive museum that you'll be so glad you saw! Admission is pretty affordable and if you buy admission here, you get free entry to the Fort Langley Historic site and vice versa! Stay with me! Birdwatching, like collecting vinyl and so many other activities previously only associated with senior citizens, is making a comeback. Get a pair of binoculars and head for the local parks and forests and go birding. It's relaxing, meditative and totally rewarding when you finally catch a glimpse of a rare bird.

Check Out The Settlement Building In Railtown

Few neighbourhoods are as unusual as Railtown, and The Settlement Building is a perfect example of why. This mixed-use place is home to art and furniture galleries as well as Postmark brewery. Explore the old architecture and take in the understated cool atmosphere of Railtown for the cost of a beer!

Eat At A Quirky Sushi Spot The best sushi outside of Japan is probably here in Vancouver. The Eatery and The General Public are the most fun you can have while eating sushi! Their eye-catching interiors laden with toys and piñatas are the perfect backdrop for eating crazy sushi rolls with wild ingredients. Itadakimasu!

Hike To The Whistler Train Wreck It doesn't get any cheaper than free! Hiking is one of our favourite things to do here in B.C. In Whistler, you can hike to see this abandoned train wreck. Now covered with graffiti, this spooky place will look amazing on any Instagram feed. I didn't realise until now how badly I need to eat lunch alongside the goats bleating softly to me from up on the roof. The Old Country Market in Coombs, B.C. is famous for their goats who wander the property and, of course, the rooftop. Unusual? Highly. Cheap? Well, you don't have to tip the goats so I'd say that saves you money.

Visit The Britannia Mine Museum You get the most value for your money at this B.C. attraction that's part museum and part geology centre. Plus, you get to explore the old mines! The old mining equipment they used is pretty impressive and it's very fun to put on a hard hat and descend into the mines on a little tram. If you can't afford a round-trip ticket to eat street food in Asia, the next best thing is this wild BBQ place where you eat everything off a stick! Their menu has many unusual offerings that will delight and maybe even fright. Set out to discover the spookiest spots in the province! It's pretty cheap to explore these places that are said to be haunted. Pack up the car and hit the road on your way to get totally spooked. Borrowing from the Japanese concept of a capsule hotel, the Pangea Pod Hotel in Whistler is the first of its kind in Canada! These unusual accommodations are perfect for saving money. We love our trestle bridges, but this one is the most unusual. The historic Kiskatinaw bridge is curved and made totally out of wood. If you find yourself in the northern parts of the province, this amazing spot is a must-see! This brand-new ropes course just opened at Grouse Mountain. Their DNA bridge is a helix twisted piece of insanity that will take a lot of guts to conquer! Make this ropes course your new workout goal and you'll have a ton of fun getting fit. This cultural centre in Alert Bay is a little-known place to see Indigenous objects, art and artefacts. These masks were originally confiscated during the Pow Wow ban and it's important to remember that B.C. history is about more than just gold-panning and pioneering. Spend an afternoon exploring this actual castle in Victoria! You'll get serious Downton Abbey vibes when you wander the grounds and the many rooms of the castle. If you have a Greater Victoria Library card, you can borrow one of the free passes.

Go On A Free Walking Tour Walking tours are getting more and more popular in the Province and some of them are even free! Pick a neighbourhood you'd like to learn more about and join in a tour. Even if you're a local, you'll get the inside scoop and backstory on some of the coolest places! For an unusual hiking trip, try out the Ahousat Trail. This spot is on Flores Island, close to Tofino. You'll see ancient Sitka forests and pristine beaches on this unique hiking spot also known as the Wild Side Trail.

Learn About Wine At The Okanagan Wine And Orchard Museum There's nothing unusual about a wine tour, that's pretty standard stuff for us here in B.C.! At the Kelowna Museum, you can take the wine experience even further at their exhibit about the history of wine and orchards. You'll savour every sip when you know how much went into producing the bottle you're enjoying.

This Vancouver cafe on Commercial Drive hosts a ton of community events like stand-up comedy and slam poetry! It's pretty cheap to check out the local talent here and it's really fun to get up close to the performers. Want to step back in time? Like, really far back? Maybe like 500 million years back? The Burgess Shale Geoscience centre is one of the coolest and most unusual spots in the province. Go hiking to explore fossils and learn about the kinds of animals that lived in the prehistoric ocean floor that's now part of our province. This new art gallery in Whistler is amazing. You're sure to get some unusual and spectacular photos here. The architecture and the proximity to nature are so incredible. It's not the cheapest gallery in the province, but if you go as part of the Whistler Wine Walk tour then you'll get snacks and wine along the way! The unusually named Whale Interpretive Centre in Telegraph Cove is a non-profit organization that wants to get you closer to the animals with whom we share the West Coast. Inside a renovated historical building, this informative centre is a hands-on way to learn about whales and their habitats. This unassuming building is the oldest in Vancouver. Admission is by donation so it's pretty cheap to check out and inside is a huge collection of pioneer artefacts, relics from sunken ships off the coast and first nations woven baskets. If you're looking for a new place to check out in Vancouver, this adorable museum is a must-see!