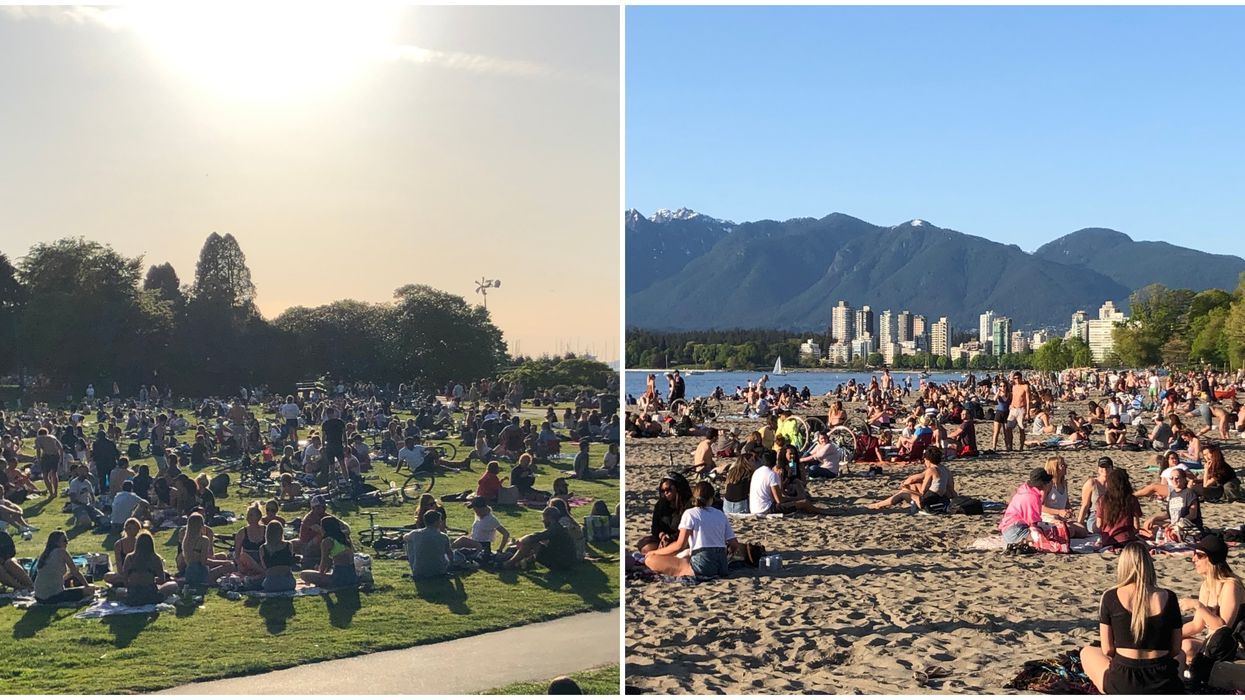 Locals in Vancouver fully embraced the summer over the weekend and it seems city officials weren't pleased about it. On Monday, May 11, the City of Vancouver told Narcity that nearly 2,000 warnings were issued to locals piling up on Vancouver beaches between May 8 and May 10.

Vancouver may be welcoming some serious summer temperatures but that doesn't mean that the city wants us throwing social distancing measures out the window.

In fact, the Park Rangers who were patrolling the beaches had to issue 1,887 warnings to the "individuals and groups who were not complying with physical distancing," the City told Narcity in an email.

These warnings were issued between Friday, May 8 and Sunday, May 10.

In an email sent to Narcity, a City of Vancouver spokesperson, Christine Ulmer, told us that Park Rangers do not have the ability to hand out tickets to offenders.

However, a bunch of them did spend the weekend trying to caution locals at the packed beaches.

In addition to the Rangers, Park Board Champions were also at busy locations, educating people on maintaining physical distancing at public spaces.

Ulmer also revealed that Park Rangers have issued a total of 11,079 warnings since March 11.

It seems like some Vancouverites still haven't gotten the memo on social distancing.

Kind of shocked to see this level of crowding and an almost total lack of social distancing at Kits Beach Friday at… https://t.co/LfmjCckUyG
— David Fine (@David Fine)1589007501.0

Photos of the packed beaches have been flooding social media and it appears that some locals are not pleased with the activities of these beach-goers, either.

One tweet features a photo reportedly taken at Kits Beach on Friday at 7:00 p.m. The poster said, "Kind of shocked to see this level of crowding and an almost lack of social distancing..."

Another person took a photo of the same situation at Kitsilano Beach. Their reaction said it all: "We are so screwed."

There isn't a shortage of posts depicting the scenes on our beaches this weekend.

According to Premier John Horgan, some restrictions are set to be lifted in mid-May.

Regardless, officials are telling us that we still need to maintain physical distancing and our social bubbles shouldn't exceed six people at once.

So it appears some Vancouverites are bending the rules a bit to get that sweet, sweet sunshine.