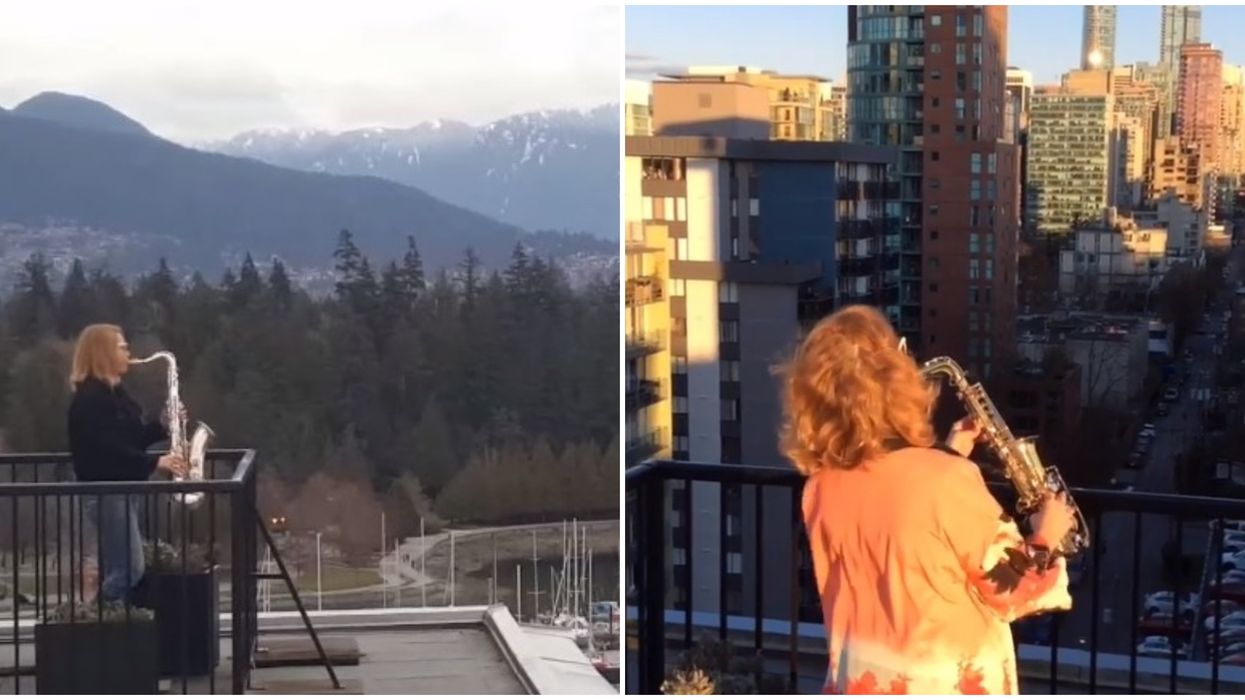 Vancouverites are gathering every night on their balconies to pay tribute to their health care heroes. There is a lot of clapping and cheering, a lot of banging pots and pans, and even police sirens. Amongst the celebration has emerged a smooth Vancouver saxophone player serenading the city with her rendition of "O Canada." And it seems like her patriotic performances have been winning the hearts of locals and she's even been caught on video.

Narcity spoke to Caley Honeywell, the woman behind these iconic saxophone performances, and she's set on lifting spirits any way she can.

She jokingly referred to herself as the "Pied Pier of Unity" as she wanted to unite Canadians during the public health crisis.

"Initially, the idea was to support frontline health line workers. I heard pots and pans but I wanted to elevate it to more of a unification piece," said Honeywell.

Honeywell resides in the West End of Vancouver, which houses a considerable senior population, she says. So, she likes to dedicate some of her musical stylings to the seniors, who have been very seriously impacted by the pandemic.

"Honestly, I'm so proud of our country's response to the pandemic," she said. "Our anthem is played in times of greatness. It's played in gatherings, and it's really just about being patriotic."

She stated that the pandemic has brought mental wellness challenges for many Canadians. Playing "O Canada" to convey unity and togetherness is as much about her mental wellbeing as it is about helping other Canadians.

Honeywell started doing her sax performances ten days ago, and she's been at it every night since then. So far, "O Canada" has been the only number in her setlist, and she intends to keep it that way.

"I don't want to be a karaoke sax player. The intention was to unite everybody, and everybody knows "O Canada." People have been singing along with hands on their hearts. If I started playing "Careless Whisper," it wouldn't have the same effect," she stated.

When asked how long she intends to keep up these performances, she said, "as long as I can."

Her work has been affected in light of the pandemic, much like so many Canadians across the country. But that's not bringing her down. "I want to take the glass-half-full approach," she shared.

It turns out that her approach is exactly what some Vancouverites have been looking for at this time. And they're not shy about going on social media to express their admiration for Honeywell's performances.

One commenter on Facebook said, "Crowd is getting louder each day. Thank you & you bring tears of hope each day to me."

A user on Reddit spoke about the performance, saying "As a Canadian abroad- this made me cry. Big love you guys. Xx."

Another user on Reddit has given her a special title, saying, "Let’s make this go viral. It is beyond amazing, I feel so much pride for Canada and BC. Thank you, rooftop saxophone goddess."

An Instagrammer expressed their admiration, stating, "What a wonderful thing you are doing."

Another Instagram user got real, saying, "This is so wonderful to see #musicheals."

There is no shortage of people who's absolutely enamoured by her performances. So far, Vancouverites have really been turning it up at the daily 7 p.m. cheers, from the police officers blasting their sirens to the masses just clapping away.

Honeywell is the latest addition to an exemplary group of people just entertaining the city the best way they can during challenging circumstances.