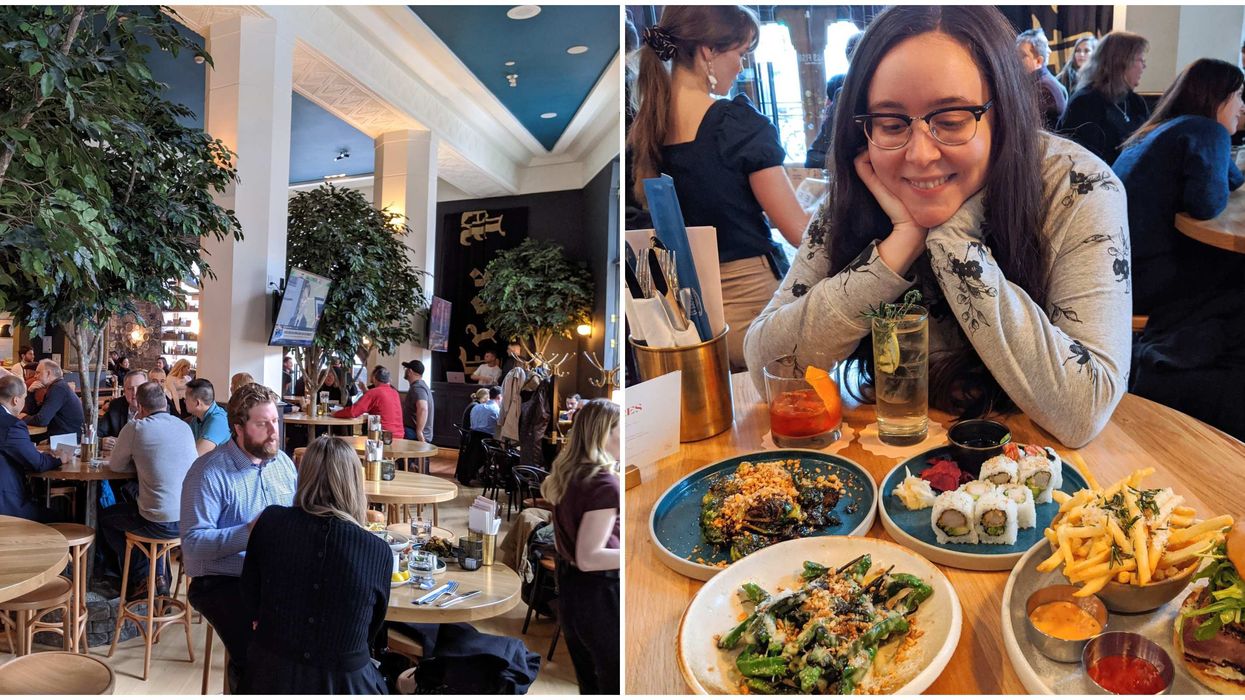 No one does Japanese fusion like Vancouver, but there's a new unexpected mashup in the city that's like a twist between an old English pub and a modern Japanese izakaya. Vancouver's Brass Fish Tavern looks lush with tables built around trees and a baby blue whale skeleton suspended by a sushi bar. It's a place you have to see to believe.

Foodies will love this new addition to the Financial District inside the Marine Building. It's taken over the space of the old Elephant & Castle pub that used to be in there.

Of all the new restaurants in Vancouver, this one has totally captured our attention.

Inside, the vibe is like an updated nautical tavern. There are vintage nautical flags on the wall but also a ton of plants and rich colours.

They even covered the bar with leather, just like they used to do on ships so that your drink wouldn't slide around as the boat rocked.

This is the only Japanese izakaya in the Donnelley Group but they definitely already know pubs and have several in Toronto and Vancouver.

Narcity took a look inside the West Coast meets Japan-inspired space. Even though they've just opened, at lunchtime, every single table was full and people were buzzing.

From sushi and share plates to towering ahi tuna sandwiches, the food here is next level.

The menu was made by Executive Chef Clement Chan who also graced the kitchen at Top Chef Canada.

You can get your favourite classic rolls like California, spicy tuna, dynamite and yam tempura, but you don't want to miss out on an order of their rosemary fries or brussel sprouts topped with chorizo streusel.

There are 24 beer taps that rotate local favourite brews plus a fleet of boozy highballs each with their own unique twist.

For cocktail drinkers, they even have a "baby-groni," or a miniature version of their honeyed negroni that comes served in a tiny glass bottle you pour over ice and then spritz with an orange rind.

Every corner inside the tavern has a new secret to discover.

Plus, if you want a little more intimacy with your izakaya, there's a loft lounge upstairs that could be straight out of an Anthropologie store.

Giant leather couches and cozy corners fill the space and it's the ultimate place to escape after work for happy hour drinks.

Why You Need To Go: Impress your friends at this modern meets vintage pub right downtown and chow down on Japanese eats.