Wet'suwet'en Solidarity Protests Continue As Activists Say They're "Not Leaving"

Several arrests were made on Monday night. 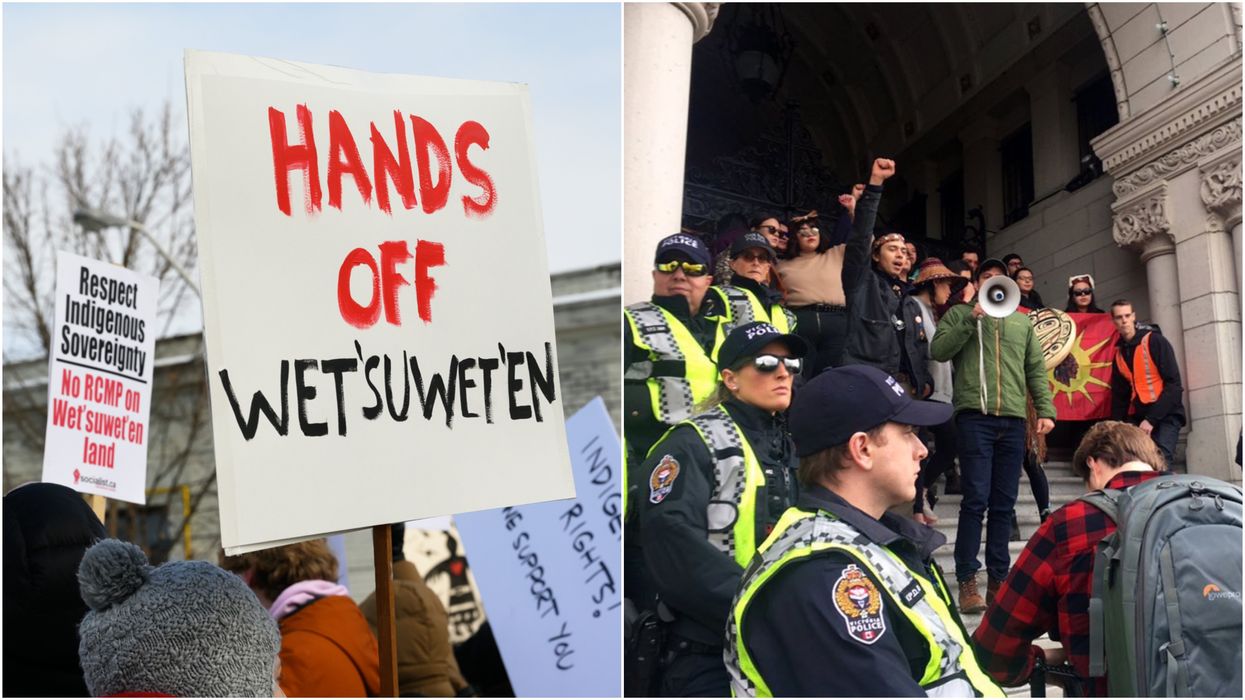 Tensions between police and Wet'suwet'en solidarity activists continue to escalate this week, after the Ontario Provincial Police attempted to shut down the Tyendinaga rail blockades on Monday. Despite news of arrests in Belleville, protesters in Hamilton have confirmed that they’re “not leaving.” Instead, Wet'suwet'en solidarity protests continue to occur across the country.

On Monday, OPP officers made efforts to dismantle the Tyendinaga Township rail blockade, which had been created earlier this month in support of the Wet’suwet’en Nation.

According to Global News, the “use of force” by the OPP triggered an angry response from those who had hoped for a peaceful resolution, and the action has sparked new demonstrations across the country.

Within hours, new rail and traffic blockades appeared across Ontario, as well as in B.C., Quebec, Manitoba and Nova Scotia.

Police have said that activists in the area must “leave peacefully,” and have served the group with an injunction.

However, in a Facebook post on Tuesday morning, the "Wet’suwet’en Strong: Hamilton in Solidarity" page explained, “We’re not leaving as long as it’s possible to be here."

In B.C., several new blockades appeared after arrests were made in Tyendinaga.

According to Global News, rail lines were occupied in New Hazelton and Maple Ridge, while demonstrators at the Port of Vancouver blocked a major intersection.

In Quebec, the Mohawk communities of Kanesatake and Kahnawake obstructed roads and railways, while activists in Winnipeg campaigned outside the RCMP headquarters.

Global reports that while the Tyendinaga protest started small, it eventually grew into a “full-fledged camp,” that was home to tents, camper vans and vehicles.

The demonstration had been causing serious disruptions to rail services between Ontario and Quebec, and forced several service cancellations from both CN Rail and Via Rail.

After issuing a deadline to clear the area, the OPP made efforts to dismantle the blockade, and more than 10 activists were reportedly arrested.

Demonstrations and blockades continue to occur in support of the Wet’suwet’en hereditary chiefs, who are opposing a Coastal GasLink pipeline that crosses their territory.

The Indigenous nation has been opposing the pipeline since 2019, and the hereditary chiefs have not given their consent to the construction.