Try these and you'll be dreaming of that trip to Seoul. 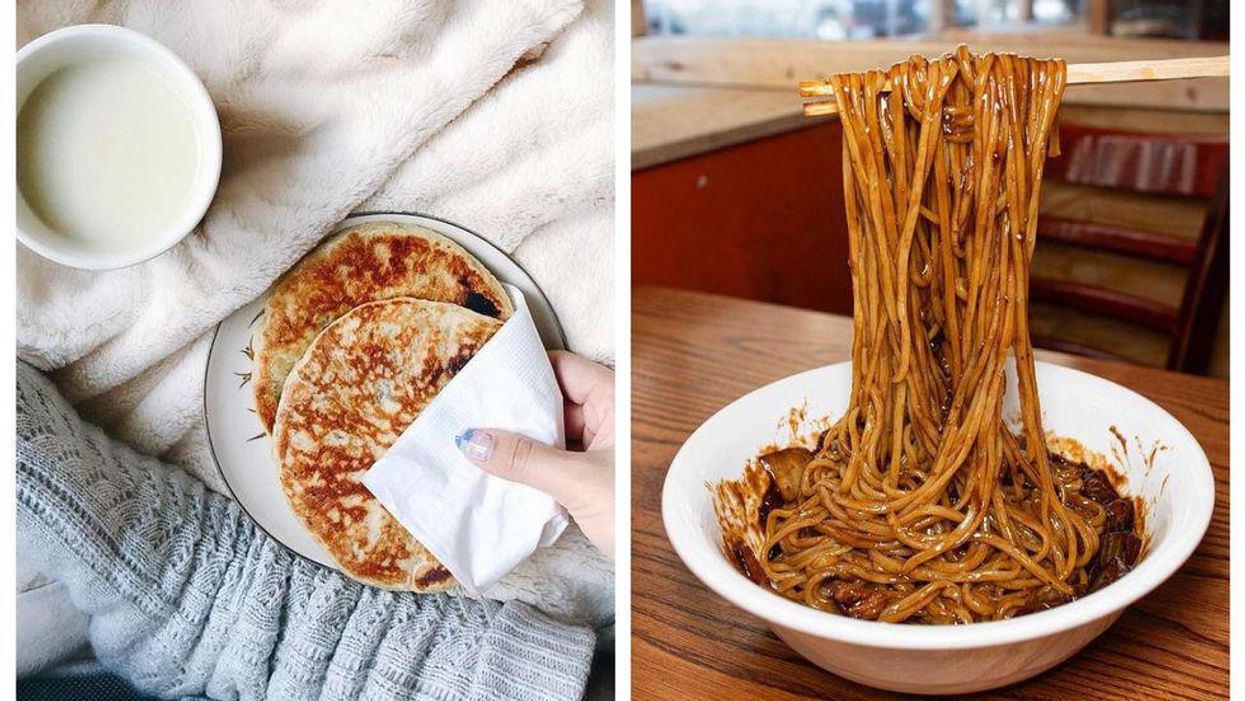 Hopping on a plane to the other side of the world is off the cards, but you can still get a taste of travel by savouring international cuisines right where you are. Canada is home to many different cultural influences, and if you live in Canada, you're among the lucky ones who can still take their tastebuds on tour without going anywhere. Making time to sample some classic Korean foods is one delicious example.

If you haven't tried it before, Korean cuisine may seem overwhelming, but food from Korea is so interesting and tasty, you really can't go wrong. Think boiling hot stews, grilled meat, chillies, and, of course, kimchi.

To help you out until you can eat like a local in Seoul, these seven mouthwatering Korean dishes may help you choose what to order on your next visit to Koreatown. They might also inspire some future travel planning for when the time is right.

If you love pancakes, these sweet Korean hotteok might just be for you. Also known as Korean sweet pancakes, hotteok are thick, doughy pancakes filled with brown sugar. They first showed up in Korea with the arrival of Chinese merchants on the Silk Road, and by the 1880s had become a popular type of street food.

Since then, hotteok has evolved into an iconic Korean dish, and while early incarnations of hotteok were savoury, today's sweet version has become a classic, with newer varieties like cream cheese, cinnamon and nuts, or sunflower seeds and pumpkin available. This Korean favourite is found across Canada, like in Toronto's Koreatown restaurant Hodo Kwaja.

It's pretty likely you've heard of (if not tried) Korea's national food, kimchi. It's best known outside of Korea as cabbage, fermented with ingredients like garlic, pepper, scallions, and ginger. However, kimchi can be made from many different kinds of ingredients such as radish, squash, or cucumber, and is a familiar side dish at nearly every Korean meal.

Kimchi itself dates back about 2,000 years to the 4th century, and now there are over 300 different varieties of this spicy, sour delicacy available around the world. It's so linked to Korean identity that there is even a museum dedicated to kimchi, which you can add to your itinerary when it's safe to travel again. Kimchi is available at most Korean restaurants, but if you're in Vancouver, try some at Sura.

A bountiful plate of rainbow bibimbap not only looks gorgeous, but it's also bursting with flavour. While there are several variations of bibimbap, it's generally served as a combination of mixed veggies, rice, beef, Korean chilli paste (gochujang) with an iconic fried egg on top.

It's a fairly recent creation (about a century old) but is derived from goldongban, a mixed rice, meat and veggie dish of the same concept from the 14th-16th centuries that was favoured by Korean royalty. Stone Bowl in Calgary makes great bibimbap; if you're lucky enough to live in the area, give it a try.

Bulgogi is easily one of the world's most popular Korean dishes. It's usually made with marinated beef, onion, and garlic, which is grilled and served wrapped in lettuce with a dollop of ssamjang (a mixture of soybean and chilli paste). If you're new to Korean food, this dish might be a good place to start since it's not as spicy as other Korean recipes.

Bulgogi is a classic part of Korea's food culture, with origins that stretch back over 2,000 years. These days it's as popular at Korean barbecue restaurants as it is at home.

Samgyetang, or ginseng chicken soup, is typically served during the hottest part of the year. During this time, Korean tradition encourages people to eat healthy food and save their energy for enduring the heat. Made with glutinous rice, chicken, scallions, garlic, Korean ginseng and jujube, this piping hot soup is served with kimchi (of course) and ginseng wine.

Hobakjuk is a traditional porridge made with glutinous rice and steamed pumpkin that popular in Korea, served hot or cold, as a breakfast dish or appetizer. It may not look like much, but don't be fooled, the pumpkin makes this smooth, velvety comfort food very flavourful and sweet. Hobakjuk is also said to be good for gut health and is often given to friends and family as a get-well gift.

Who doesn't enjoy slurping up some tender noodles? This simple dish of noodles served in black bean sauce has become one of the most popular dishes to come out of Korea. Jjajangmyeon is most commonly associated with Korean Black Day, a trend where singles get together on April 14 to commiserate on their love lives while eating black-themed food.

It's not strictly reserved for this day, thankfully, and jjajangmyeon is can be enjoyed all year round whether you're single or not. If you're in Toronto, you can order it for takeout from Sunny Dragon, The Great Wall, K-Wok and Jin Dal Lae.

All of these mouthwatering, flavourful dishes are just a taste of what's out there when it comes to Korean cuisine. And since you can't yet travel to experience Korean food from the source, at least for now you can enjoy plenty of it at home in Canada.

If this has whet your appetite for more Korean culture, why not start planning your future trip there with the help of the Korea Tourism Organization? From recommendations on Korea's delicious food culture to virtual night tours of Seoul, it's all the inspiration you need to plan your next journey.