It takes them three hours just to sew the buttons! 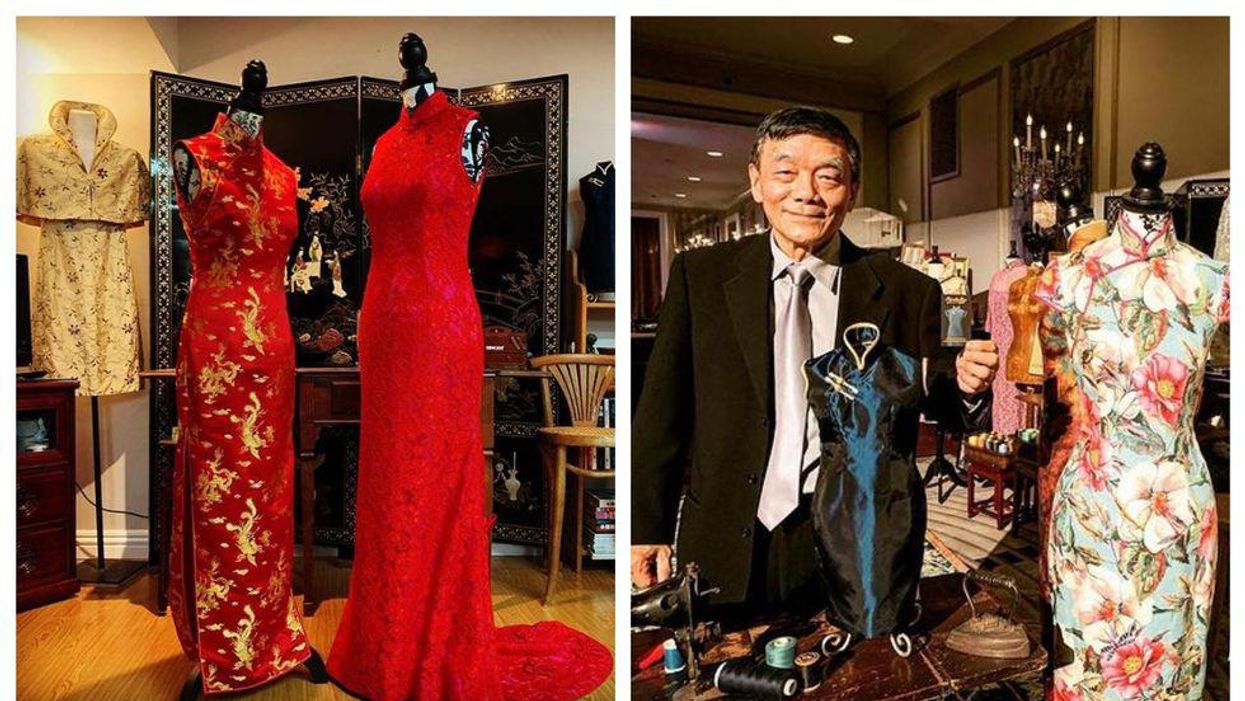 It takes three hours for Connie Sung to stitch her handmade buttons to her cheongsams. Also known as a qipao, these traditional garments from Hong Kong are made from embroidered silk with intricate cloth buttons on the front and an iconic high collar.

Sewing the buttons is an extremely delicate process — one that Connie, her husband Tommy, and the rest of the Sung family know very well.

Canada-based Tommy and Connie Sung are specialists in the art of cheongsam tailoring. Before moving from Hong Kong to Canada in 1996, they ran a Western-style tailor shop in Hong Kong's legendary Repulse Bay Hotel and operated a home workshop out of the staff quarters. As a global shopping destination, Hong Kong is home to some of the most sought-after cheongsam tailors and designers.

Now, as masters of their trade, they operate a small workshop in the basement of their suburban Toronto house, working together to keep their family business going. While Connie looks after all the affairs of the business and makes plans for the family's future, Tommy concentrates on making clothes.

Despite the ups and downs of family life, the changing demand for traditional tailoring, and the challenges brought on by their move to Canada, the Sungs have lived and worked together for 40 long and happy years.

These traditional garments are well-known for their beauty and the skill that goes into creating each one. So much so that the Hong Kong Economic and Trade Office (Toronto) has created an exhibit that's entirely dedicated to the craft.

Transformative Chic: The Everlasting Cheongsam Exhibition is an exclusive virtual experience showcasing the creativity of Hong Kong fashion designers who have revitalized this cultural icon. The exhibit is open now for anyone to experience.

Tommy and Connie always assumed that they would be the last of the family's three generations of tailors to practice the art of making cheongsam. But then, unexpectedly, their youngest son, 37-year-old Simon, asked to be taken on as his father's apprentice.

The couple's eldest son, Alfred, has watched his parents carefully size and cut fabric, hand-make buttons and sew together these beautiful garments his entire life. Understanding the hard work and passion that has gone into his parents' business, Alfred was inspired to share their story with the world. This led to the creation of his documentary, The Last Stitch, which shows the detail his parents put into creating each cheongsam.

This interview has been condensed and edited for clarity.

Featuring an ageing Tommy and Connie who are grappling with retirement, Alfred's documentary follows the family as they search for a way to maintain their business and carry on the cheongsam legacy. The documentary centers upon the idea of continuing one's legacy, and Narcity got the chance to speak to Alfred about it. The Sung family's story is full of history, passion, and beauty, and we're honoured to share a snippet of it with you.

"Arriving in a foreign land with their two sons, [my parents] made good use of their tailoring skills and [rebuilt] their family business from the ground up," Alfred told Narcity.

The History Of The Cheongsam

There's a lot of history behind traditional cheongsam garments, dating back 100 hundred years to 1912 Shanghai where they originated. Because of the cheongsam's resemblance to a traditional male garment called the changpao, they weren't immediately popular.

It wasn't until the 1920s, when movie stars and school girls began to wear the look, that the cheongsam caught on. Wanting to push back against traditional values, women started wearing an early version of the cheongsam when they entered the school system as students or teachers.

Over the years, the style of the cheongsam evolved and its popularity grew. It became known as a regular outfit for women in the cities, adopting new silks, contemporary textiles and different patterns.

Near the end of the 1960s, Western fashion had made its debut and the cheongsam's popularity began to decline. In recent years, designers and tailors in Hong Kong have worked to bring cheongsam into the modern age by employing a diversity of materials, technology and craftsmanship.

The Modern Cheongsam: A Fusion Of East & West

According to Alfred, "Tommy and Connie are not the typical kind of traditional cheongsam tailors, as they have been trained and worked with western tailoring skills since their teenage years."

"They apply western skills to hand-make cheongsam for their clients in Canada," he said.

Most of Connie and Tommy's clients are members of the Chinese diaspora. They'll visit when they need a new garment for attending an important ceremony, like a wedding. However, Tommy and Connie have stitched garments for many special occasions, including one for Canadian violinist Susanne Hou to wear during her performance of The Butterfly Lovers in Toronto.

Every Cheongsam Is A Piece Of Art

According to Alfred, each button, sleeve and collar showcases the true skills of a cheongsam tailor: "Tommy and Connie see the cheongsam's Mandarin stand-up collar as the soul and charisma of the cheongsam. Flower buttons are another key element. It requires high skills and an artistic mind to master buttonmaking."

"The collar is where a tailor can showcase his or her skills. An elegant cheongsam is now associated with the image of success and beauty," Alfred told Narcity.

Discover the craftsmanship behind a traditional cheongsam www.youtube.com

Hong Kong is home to many talented artists, performers, and designers. There's the Hong Kong Arts Centre, Hong Kong Museum of Art, and the Centre for Heritage Arts and Textile — all of which feature amazing pieces of art and history.

With over 300,000 Canadians living in Hong Kong right now, and Chinese cuisine, art, history and fashion celebrated all across Canada, you don't have to look far to see the strong connection between these two cultures.

If you're itching to explore but can't right now, you can still immerse yourself in Hong Kong culture with Arts in Hong Kong, which features an array of itineraries, calendars and stories exploring the creativity of the artists who call this place home. Check out Transformative Chic: The Everlasting Cheongsam Exhibition, being held in Canada throughout June to July 1, where you can learn from some of the top Hong Kong designers about their modern and unique interpretation of these beautiful garments.