She joined in on their performance of "Hero"! 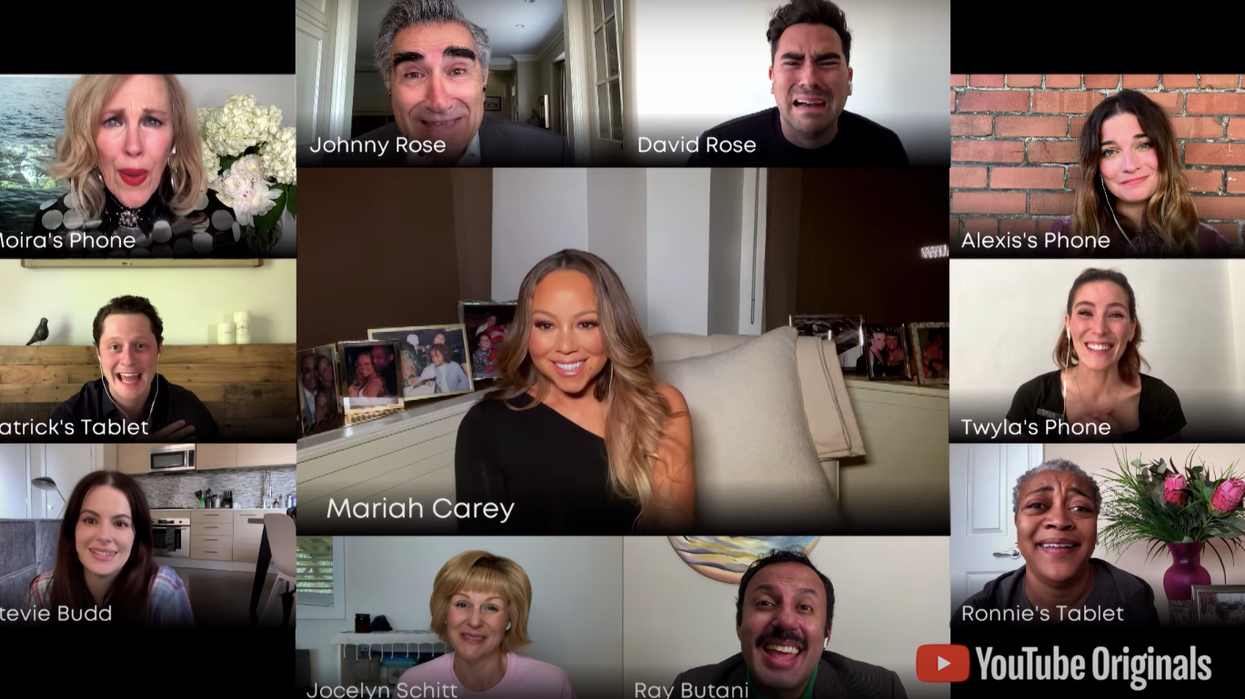 She'll always be their baby! The Schitt's Creek cast joined together to give a virtual commencement to the graduating class of 2020. They received a surprising treat while playing their iconic characters when fan fave Mariah Carey joined in on their performance of her song "Hero".

Stars Catherine O'Hara, Eugene and Dan Levy, and Annie Murphy opened the video titled "Dear Class Of 2020" that was posted on the YouTube Originals channel on June 7.

The actors put on their best performance as the Rose family characters Moira, Johnny, David, and Alexis.

In typical Moira fashion, she started off the video by name dropping the Obamas and using unnecessarily fancy words like "preceptors" and "panegyrical".

A not so tech-savvy David chimed in, or rather screamed in, stating that he didn't think his microphone was working to which Alexis replied, "Shh, David, everyone can hear you."

Starting off their speech, Johnny spoke to the teachers of the graduating class and said, "We wanted to express from the bottom of our hearts just how necessary you all are in shaping young minds."

Familiar faces from the tiny town of Schitt's Creek joined in on the Zoom call, all continuing to play the characters we know and love.

Patrick started off their rendition of "Hero", which was helped by Reid's musical background as a singer and musician. The rest of the cast vocalized together while he sang the lyrics to Carey's 1993 single.

Patrick and Twyla joined together to sing the chorus featuring the lyrics, "And then a hero comes along/ With the strength to carry on/ And you cast your fears aside/ And you know you can survive".

During the last few lines of the song, Carey mysteriously joined the Zoom call, adding that finishing touch to their rendition of her song.

A shocked David immediately gasped when he saw Carey appear on the screen.

"Moira darling, I hope you didn't mind that I jumped in like that," Carey said. "You all sounded so good that I had to get in on it."

David continued freaking out and began nearly sobbing while yelling, "I think I'm having a heart attack!"

Carey continued, "To all the teachers and professors, especially the ones who had to deal with students like me, who never really showed up at school on time, you rose to the occasion and helped these students reach the finish line."

After congratulating the class of 2020 and thanking the Schitt's Creek characters for letting her join in, Carey added one last surprise for David.

"You'll always be a part of me/ I'm part of you indefinitely," she sang directly to him from her 1995 hit "Always Be My Baby".

At that point, a starstruck David collapsed on the floor and the video ended with him heard off-screen screaming, "I love you!"

You can watch the full performance below.

Starting on June 30, outdoor sporting events will be allowed to have spectators in the stands at 25% capacity. Fans can head off to the races at Woodbine Racetrack and Woodbine Mohawk Park starting on Canada Day, announced Jim Lawson, the CEO of Woodbine Entertainment, on Twitter.