Radar detectors are illegal to use in Ontario. 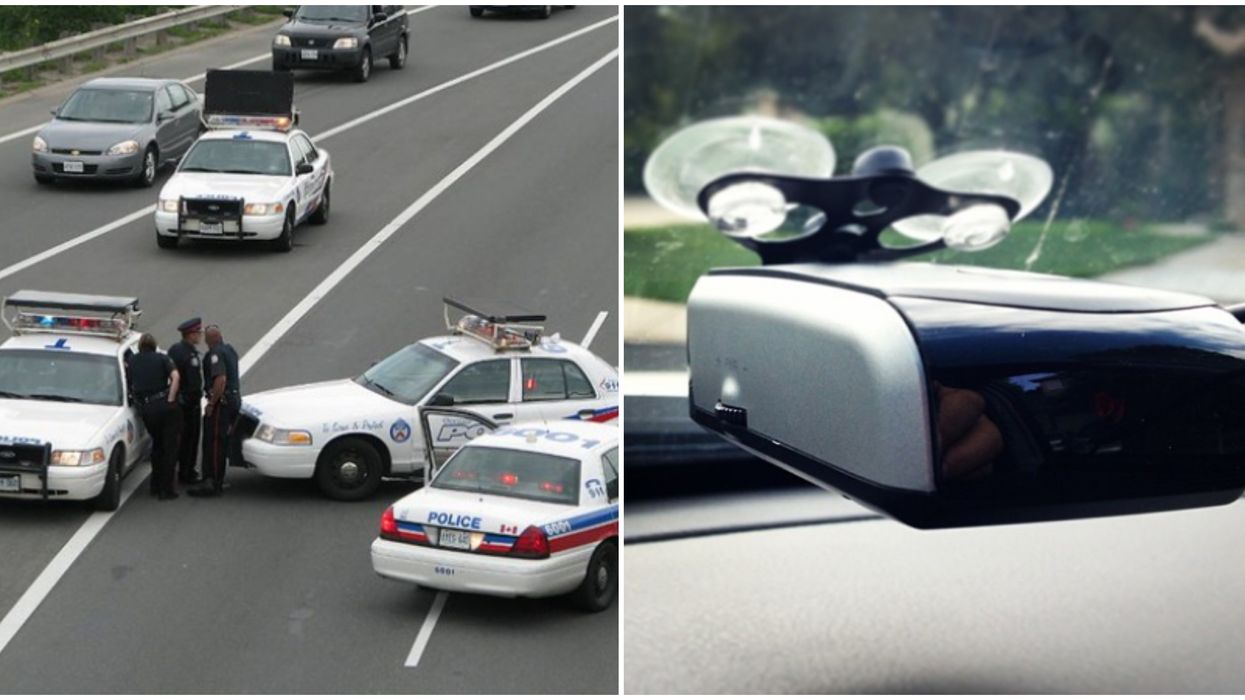 Some Torontonians are going the extra mile to not get caught speeding. Toronto Police are seizing radar detectors in Ontario that are being used to avoid running into police while speeding. The devices are illegal to use in the province but are still for sale all over the place.

Toronto Police Services (TPS) officer Kyriakos Papadopoulos tweeted on Friday, July 3 to confirm another radar detector had been seized in the city.

Papadopoulos wrote that "the only reason to have one of these is to evade Police while speeding."

But how exactly do they work?

According to KMPH: "A radar detector scans for microwave frequencies transmitted by the police radar units or hand-held radar guns. The radar detector will give advanced warning so the driver is able to slow down before the officer is able to check the speed of the vehicle.

And are they legal in Ontario? The short answer is no, you can't use them here.

While they're currently allowed in British Columbia, Alberta, and Saskatchewan, they are prohibited in Ontario and other provinces.

TPS Traffic Services Sgt. Jason Kraft told Narcity by phone that Ontario's Highway Traffic Act gives police the power to stop and search a vehicle that they have reason to believe contains a speed measuring warning device like a radar detector.

Another Radar detector seized. The only reason to have one of these is to evade Police while speeding. Slow down is… https://t.co/KMC1lKBRoP
— PCPapadopoulos (@PCPapadopoulos)1593793258.0

And although these detectors give you a heads-up, Ontario police forces apparently use technology to notify officers if a radar detector has been detected nearby, per KMPH.

Typically, the fine in Ontario for a first offence includes a $170 fine and potentially three demerit points.

According to Papadopoulos, that's what the driver in this incident was hit with.

Speeding and stunt driving has been a big issue for police in Toronto and wider Ontario since the COVID-19 pandemic took a lot of traffic off the streets.

The 6ix installed 50 photo radar speed cameras last year and now they will start charging you for speeding on July 6.

However, even before these cameras were in action, some of them were being stolen off city streets.

Toronto Police's crackdown is unsurprising, given there have been a couple of high-profile speeding incidents near the city recently.

A driver in Brampton completely totalled his car this week, leaving the residential area looking like a scene out of a disaster movie.

Things could have been a lot worse, though. Last month, another horrifying car crash in Brampton left a mother and her three daughters dead after a speeding car crashed into her SUV.

As PC Papadopoulos added: "Slow[ing] down is the best radar detector."