The unit is inaccessible and in poor condition. 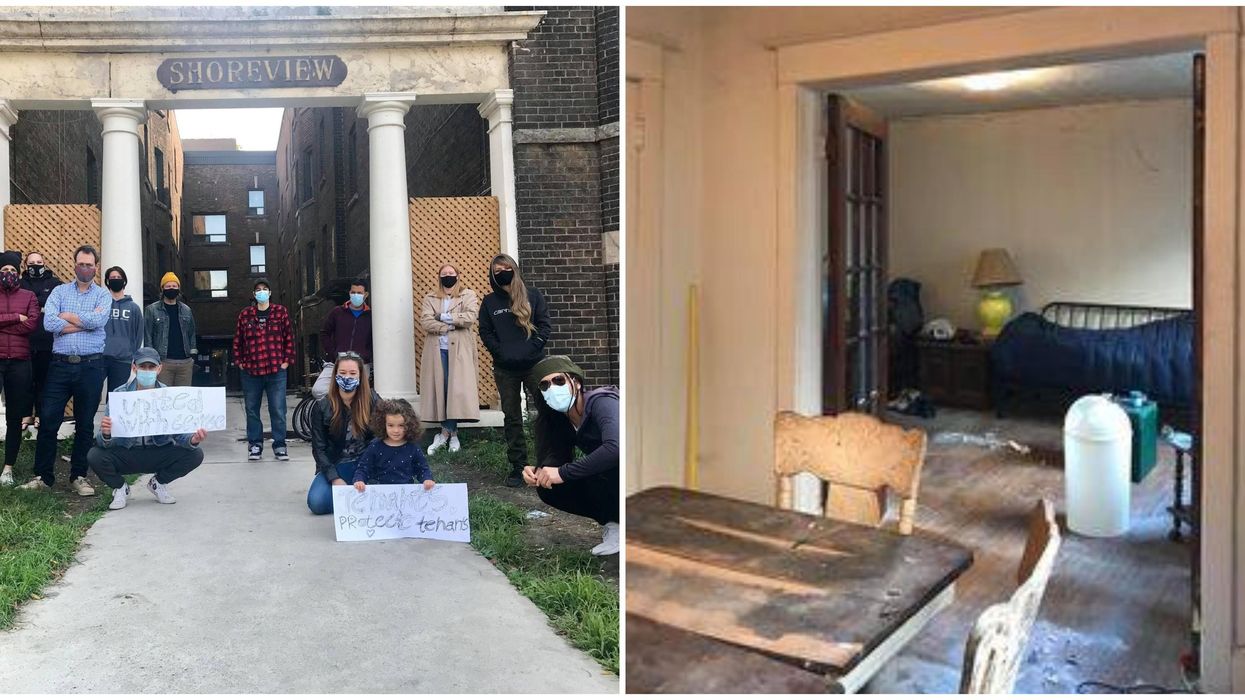 A group of tenants in Toronto's Parkdale community are demanding an accessible unit for their 77-year-old neighbour after he suffered a heart attack.

George Morrison, who has been living in the building at 1475 King Street West for 45 years, was admitted to the hospital in August and is set to return home.

The man had been living in a two-bedroom unit on the third floor but is now requesting to move into an empty, one-bedroom ground floor unit because the building has no elevators.

However, the landlord, Golden Equity Properties, argues that he must pay $400 extra monthly for the unit, compared to the $1,000 that he is paying now.

Residents of the community are now fighting together to help Morrison get the ground-floor unit.

Why is Morrison trying to switch apartments?

After his heart attack, Morrison can no longer make it to his apartment safely.

"He can’t climb flights of stairs," Jennifer Tomic, a resident of the building, told Narcity.

"He’s asked even his medical team to help bring him into the apartment because he has to climb I think it’s three or four flights of stairs."

Cole Webber at Parkdale Community Legal Services has also said that the apartment is "in no condition for him to return to from hospital when he’s discharged."

"It’s a third-floor unit, there’s no elevator in the building and he’s not going to be able to manage the stairs so that’s why his neighbours have come together to say that the landlord needs to transfer him to a newly renovated ground floor unit at the same rent he now pays."

What condition is the old apartment in?

Residents who have been in the apartment say it has a hole in the ceiling, something the landlord says was not reported until September 14.

However, residents have said that maintenance request forms were submitted in March and again in August.

"They were doing renovations above him on another apartment and the ceiling collapsed on his bed," said Tomic.

"It’s an inhumane place to keep a human being. I was almost in tears when I walked through there," she remembers.

Tomic describes the place as dusty due to the debris from the accident, "infested with cockroaches", and somewhere that is unsuitable to live.

"There’s no way he can go back there. No human should live in there. The ceiling’s falling down still. I’m pretty sure living in those conditions didn’t help his health at all."

What are the landlords doing?

Narcity spoke to Ian Copnick, the local council at Golden Equity Properties, which owns the building.

"I think the landlord’s being more than fair," said Copnick over the phone.

"Mr. Morrison wishes to move to a renovated apartment on the first floor, the market rent of which greatly exceeds the rent that he is paying now."

"The landlord has offered generously to cut that market rent under the circumstances and as a gesture of goodwill to offer it far below market to Mr. Morrison."

"Now it does represent a certain increase over what Mr. Morrison is paying right now, agreed, but as I said the landlord is being more than accommodating."