The city's renters are making themselves heard. 🗣️ 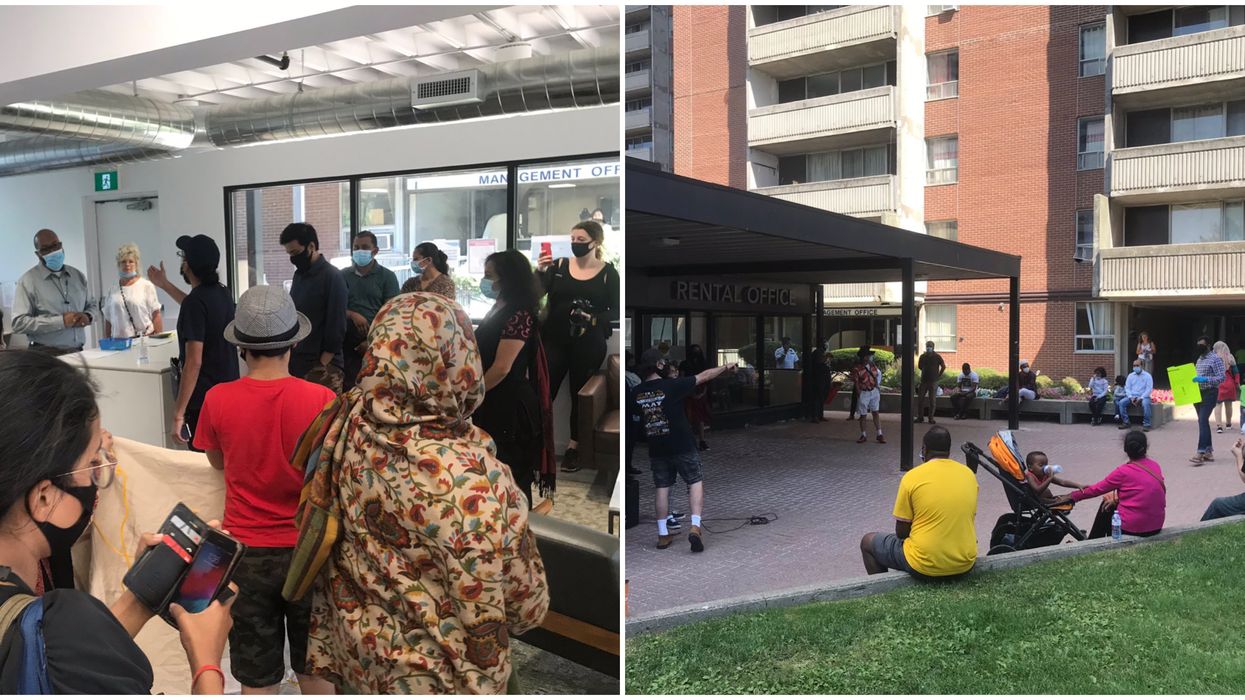 All over the city, tenants have been fighting back against Toronto COVID-19 evictions. Today, residents of Crescent Place, owned and managed by Pinedale Properties, took over the company's management office to demand better living conditions and fair treatment. The office is near Danforth Village, off of Victoria Park Avenue.

Samuel Nithiananthan, a participant in the occupation and member of People's Defence Toronto, spoke to Narcity about the conditions tenants of the building have faced.

He said that the property managers have allegedly done nothing to sanitize shared spaces, have even gone so far to say that COVID-19 doesn’t exist, and attempted to illegally evict tenants on extremely short notice.

“The occupation was organized after tenants tried to reach out to Pinedale properties to ask for fair and reasonable negotiations. Management has either ignored [these requests] or escalated the situation," said Nithiananthan.

He continued that, while tenants are asking for a collective negotiation to happen, management is allegedly only willing to meet with tenants individually.

He says that this is an issue, as many tenants are immigrants and there is a language barrier.

The #CrescentTown Tenant’s Union has a message for Toronto tenants: “Let’s unite together. We will defend each othe… https://t.co/UjcWhnlN0P
— PeoplesDefenceTO (@PeoplesDefenceTO)1597955032.0

The property management company apparently managed to meet with one individual tenant, and in doing so, demanded they pay back half of the unpaid rent they owe the company or face immediate eviction.

Management has also gone door to door with debit machines, urging tenants to pay on their doorstep, Nithiananthan claimed.

During the occupation, a property manager of Pinedale Properties was filmed allegedly assaulting a demonstrator

They responded saying they "have sent letters out to tenants, [which have] resulted in many respectful discussions and a number of repayment agreements."

Nithiananthan explained that some of the residents of the buildings have been there for over a decade, and, in turn, their rent is at a much cheaper level than market value.

This, he says, provides incentives for landlords to evict current residents and charge more upon re-renting the units.

#CrescentTown tenants have sent a clear message to Pinedale: they will not tolerate COVID evictions or coerced repa… https://t.co/jfZFkZfNbv
— PeoplesDefenceTO (@PeoplesDefenceTO)1597960736.0

While Mayor John Tory said on August 19 that he doesn't have the power to stop evictions, People's Defence Toronto are calling for "unprecedented measures in unprecedented times."

Just two days ago, demonstrators blocked the entrance and exit to Toronto's courthouse, in an attempt to physically block evictions from being executed.