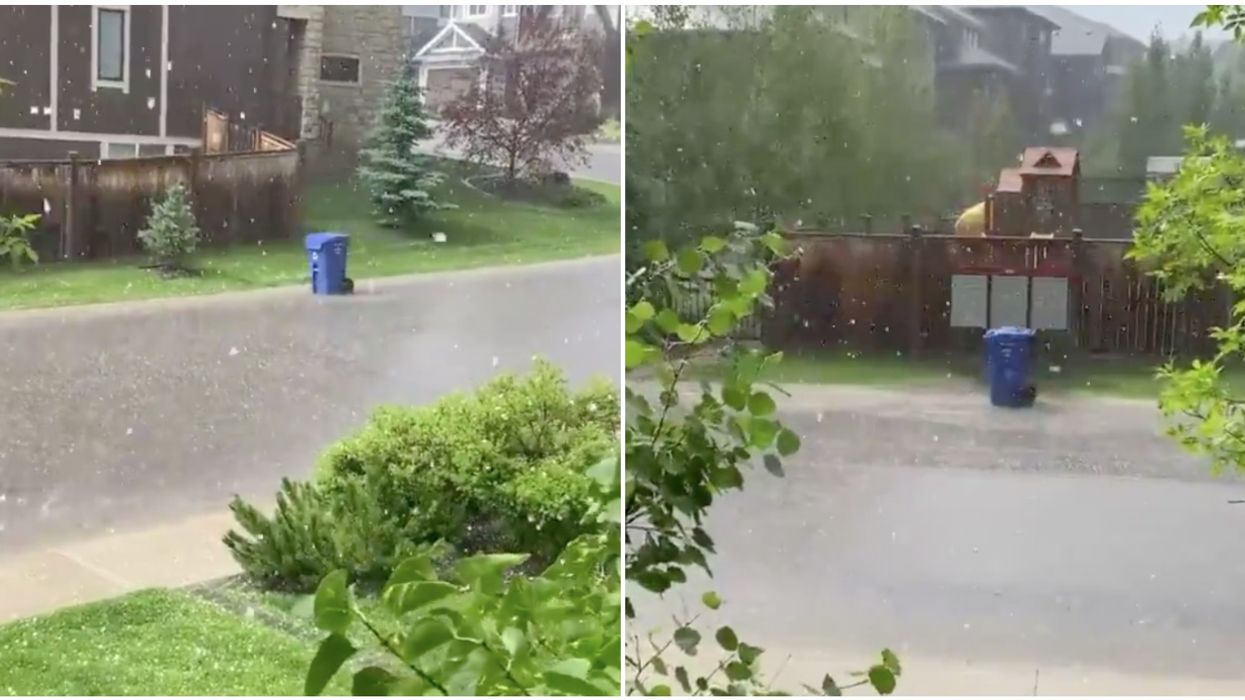 The weather in Alberta has been less than ideal this summer. But a recent Calgary hail storm caused quite the commotion and someone was able to capture a video of a blue recycling bin rolling through the streets. While it may not sound like much, trust us, it's an absolute mood. It’s so relatable it hurts and it's hard not to laugh at it.

Mother Nature has been doing no favours for Calgary since the winter months.

Editor's Choice: An American Man Just Got Caught Illegally Entering BC & He Had Nearly 200Kg Of Meth

We literally went from copious amounts of snow to extreme heat and severe thunderstorms.

The area even once got “baseball” sized hail this year that destroyed cars.

At this point, nothing the weather channel says is surprising.

On Thursday, July 23, Calgary was greeted to yet another hail storm.

A local was able to capture a video from her front door that shows a blue bin literally rolling down the street by itself looking as though it was retreating from the hail.

“Another hailstorm? This blue bin was like ‘Nope. Bye y’all, good luck with the rest of this year,’” reads the tweet.

These intense storms are nothing new to us and just two months ago, there was a mega-storm in the city that broke records for the amount of rainfall.

We aren’t in the clear yet and it looks like more rain is on the way for Friday, July 24.

According to Environment Canada, there is a 60% chance of rain today and even thunderstorms.

While it will be a warm one with a high of 19 C, rain is a strong possibility.

This mix of weather could make for some fun storm watching but just be sure to do it from indoors.

Environment Canada has released a statement reading that today's severe thunderstorms could be capable of producing strong wind gusts, heavy rain, and even large hail.

So keep an eye out for more blue bins rolling down the street.

This weekend things will begin to dry up a bit with highs of 20 C and 23 C on Saturday and Sunday respectively.

If we’ve learnt anything from this summer it’s that we can’t predict anything.

While it may be hot this weekend, you shouldn’t put the rain boots away quiet yet.