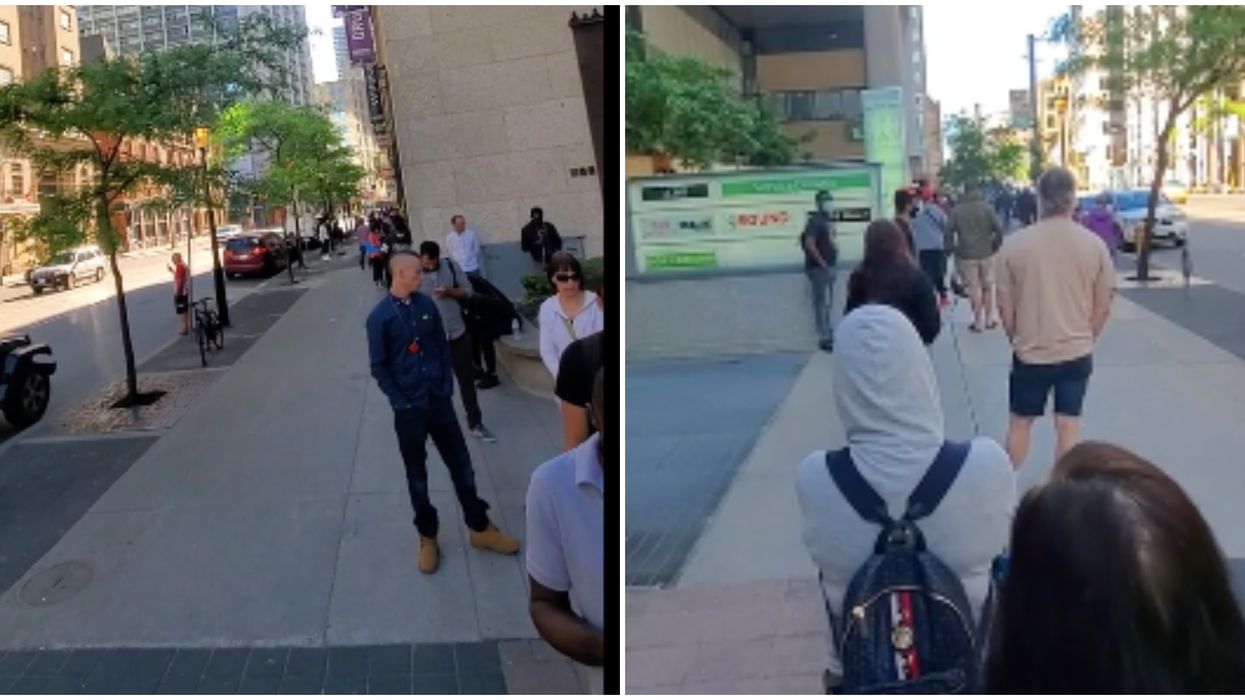 If you need to head out to Service Ontario, you might want to wait. Photos of a crowded queue at one Toronto branch have appeared online where people are lined up around the block. It's even being reported that some are camping overnight in the Service Ontario line for a chance to be served.

Being the only location in the province where drivers can write their G1 and M1 tests, the 777 Bay Street location has been a bit busier than normal.

Drive Test centres across the province are still closed, causing an intense flood of demand for the one location where new motorists can write their entry-level tests.

Photos of the long lines have appeared on social media, showing people sitting in lawn chairs as the lines go around down the street.

Narcity spoke to Caledon, Ontario resident who claimed he showed up to the Toronto location two hours before they opened just to get a spot.

“I showed up at 7:15 am when they open at 9 just to get in line. When I got there, the line was already 150 to 175 people long," Reddit user Maverick told Narcity over the phone.

Even after waiting for two hours, he reportedly never received a ticket because the company started turning people away.

@ServiceOntario @AaronsCamille Here's a very non-social distanced line at the ONE LOCATION IN ONTARIO where you can… https://t.co/7MfYpeEbYu
— TheRealDave (@TheRealDave)1591464957.0

In fact, some people had camped out with tents the night before just to get the first spot in line, he says.

By the time the location had actually opened at 9 a.m., the lineup had reportedly stretched all the way north and up to College Street.

"By the time they opened it was about a 500 person line," Maverick remembers.

Narcity has reached out to Service Ontario for a comment but has yet to hear back.

Although there is no known wait time, Service Ontario has tweeted that 777 Bay is "busier than normal at this time."

CP24 reports that one Ontario resident and his friend even drove down from Warsaw, Ontario and camped out overnight in an attempt to be served.

"My buddy was actually turned away. He came with me and we camped out all night and he got turned away right after I got my ticket,” the camper told CP24.

However, Service Ontario isn't the only place that people are waiting in huge lines to get into.