Alberta is also looking into it. 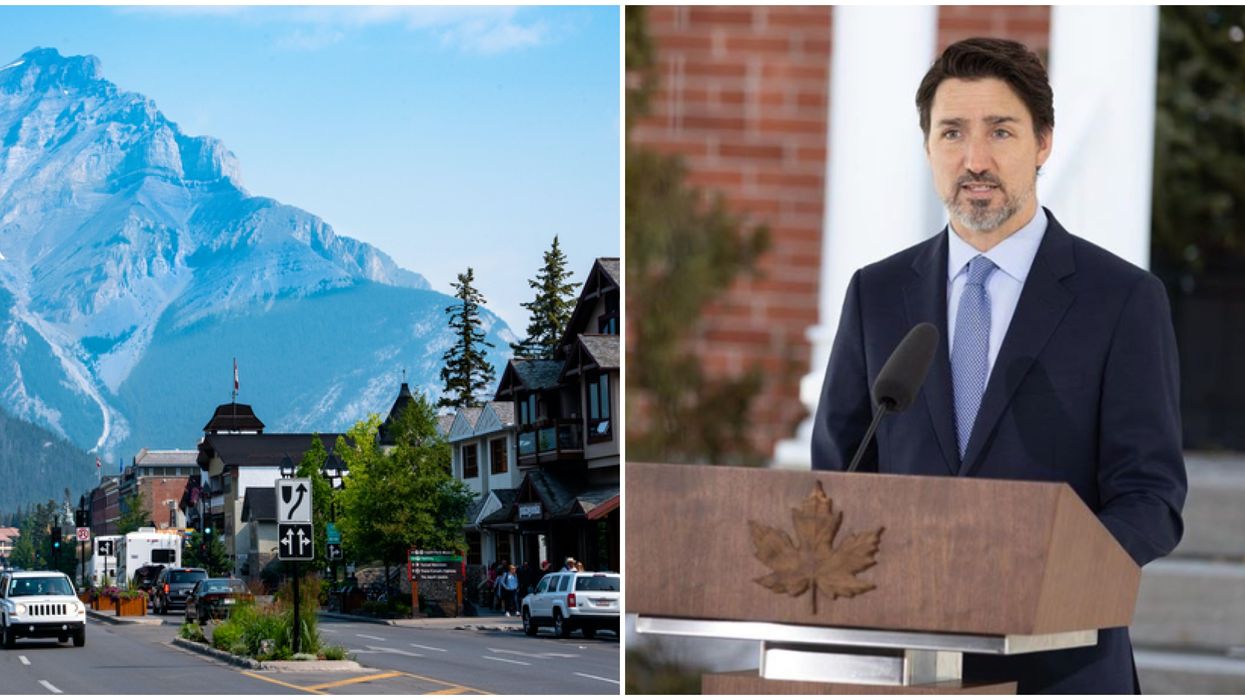 People are getting crafty to get across the border. On Monday, June 15, Prime Minister Justin Trudeau said that a new loophole that's reportedly getting Americans into Canada is going to be investigated by the government. Dr. Deena Hinshaw, Alberta's top doctor, also said that she will be following up on reports of the "Alaska loophole."

Under the Alaska loophole, Americans have reportedly been able to cross the border by telling crossing officials that they're driving up to Alaska rather than vacationing in Canada. People can legally cross the border if they are returning home to Alaska, not just visiting Alaska.

On June 12, a report emerged that a Texas family was vacationing in Banff, Alberta after allegedly having used this tactic. As per a local woman's Facebook post, there was another group from Seattle that did the same.

Trudeau took to address these reports in a press conference on Monday, June 15, after a member of the media called in to inquire about it.

"Obviously, we've heard those reports over the past few days and are looking into them," said the Prime Minister.

"I think as we continue our conversations with the Americans, as we look at adjusting or shifting our posture in certain ways, we need to make sure we’re able to apply the rules consistently and that we’re doing everything necessary to keep Canadians safe at this important time," he said.

On the same day, Alberta's officials were also asked in their press conference about the situation.

"We do know that it's possible for people who're driving to their home in Alaska to be able to cross the U.S. border," said Dr. Deena Hinshaw.

She said that she's been in contact with the Public Health Agency of Canada and the Canada Border Services Agency (CBSA).

She's talked to the agencies about being very clear about what is required to cross the Canada-U.S. border legally.

Dr. Hinshaw addressed the report about the Texas family in Banff, saying, "I’ll be following up with conversations with my counterparts at the Public Health Agency of Canada."

She also said, "I don’t have information to indicate this is a significant number of people crossing the border."

In an email sent to Narcity, a CBSA representative Judith Gadbois-St-Cyr said that if a border official has doubts about a traveller's purpose, the traveller will be asked to prove it.

Gadbois-St-Cyr told us that travellers who are let into the country for the purpose of returning home to Alaska are advised to follow rules, such as remaining in the vehicle as much as possible, avoid staying at a hotel, using a drive-thru to get food, and social distancing whenever stopping.

"In all port of entry cases, the final decision is made by a Canada Border Services Agency officer, based on the information available to them at time of processing," said the representative.

Feel at home in the Rockies.

No matter what time of the year you visit Banff, Alberta, you're guaranteed to have an amazing experience.

If you're looking for can't-miss travel destinations, you'd be remiss not to look right here in Canada before you set your sights on a more global scale. A ranking of the 30 best places to visit in the world has been released by U.S. News and Banff, Alberta, made the cut.

It's no secret that the Alberta mountain town is worth the trip, and people travel from around the world to see the awe-inspiring alpine terrain for themselves.

While Banff landed at number 18 on this list, it actually beat out some pretty spectacular global destinations including the Great Barrier Reef, Yosemite National Park, Santorini, Florence, Rio de Janeiro, and more.

It wasn't the only Canadian location to make the list; Niagara Falls snagged the last spot, coming in at number 30.

From the bustling Banff Avenue and the iconic Banff Springs Hotel to all of the nearby lakes, hiking trails, and mountain adventures, Banff is a pretty special place that you should probably experience at least once.

We can all agree the Rocky Mountains deserve a spot on every Canadian bucket list. But it can be hard to determine what you need to do and see while you're there.

We've rounded up a list of things to see in Banff and nearby that are basically a rite of passage for visiting the area. If you've checked off all or most of these places on your list, you can pride yourself on knowing that you've hit up the most iconic spots around.

Alberta's First Bear Of The Year Is Officially Out Of Hibernation

Alberta's Bears Are About To Wake Up For Spring & The 'Big, Dominate Males' Will Be First