"I know I’m saying the right tings cause....it’s a ton against me." 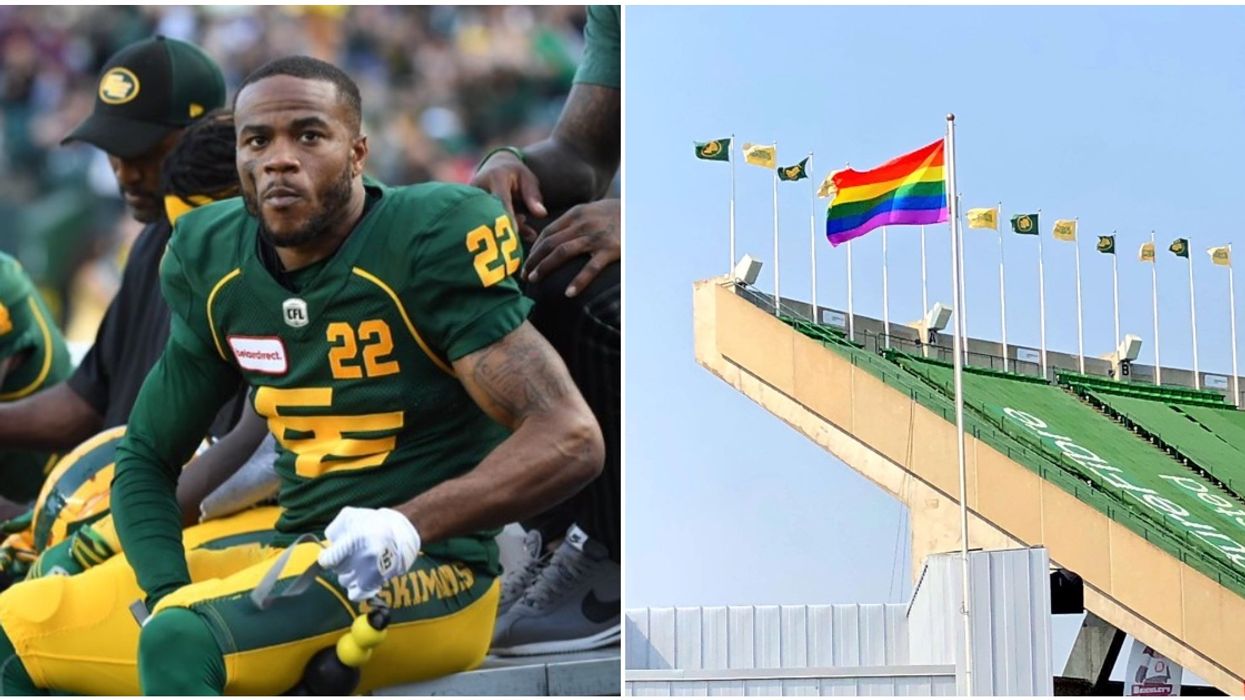 The Edmonton Eskimos made a cut over the weekend. A now-former Edmonton CFL player’s homophobic tweet has resulted in the player being released from the team's roster. The CFL and the team have now issued public apologies, as has Christion Jones, the player in question.

Every June is pride month. While it's typically a time to celebrate diversity and inclusion, a tweet has been brought to the attention of the public that included blatantly homophobic comments.

The tweet was published by Christion Jones — a now-released wide receiver for the Edmonton Eskimos.

He ended the tweet with “Thats me tho! Live life with safety."

In a series of tweets and replies released on the same Saturday, Jones also stated that “I know I’m saying the right tings cause....it’s a ton against me.”

The tweet was met with tons of backlash from both fans and other Twitter users but Jones initially stood by what he said.

In another tweet, he wrote that “I STAND ON WHAT I SAY. Regret nothing. Apologize to who???" according to CBC News.

The Eskimos got wind of what happened and released Jones from the roster.

Following his release, Jones tweeted out an apology on Sunday, June 28.

“From Janis Irwin. “This is an opportunity for growth.” She is absolutely right. My words were deeply hurtful, painful and served zero purpose. I added to the struggle of a community, to live a life free of oppression of any kind. I sincerely apologize. I was wrong.”

From Janis Irwin. “This is an opportunity for growth.” She is absolutely right. My words were deeply hurtful, painf… https://t.co/e1R6JHIHEE
— Christion Jones (@Christion Jones)1593375977.0

Both the CFL and the Edmonton Eskimos have also come out with apology tweets.

The team said that it stands with the LGBTQ2+ community and they “firmly condemn the language used by Christion Jones.”

They also wrote that there is “no place for such commentary on our team” before confirming with the public that he was released from the roster.

The CFL wrote that while they aren't perfect, they do strive to be inclusive and to celebrate differences.

There is no place in our league for commentary that disparages people on the basis of their religion, race, gender… https://t.co/kY9oPbhJkD
— CFL (@CFL)1593377278.0

They also noted there is no place in the league for comments that “disparages people onto the basis of their religion, race, gender or sexual orientation.”

This isn't the first time the team has come under fire. In October of last year, people were speaking up about changing the team's name. Outcries of this nature have been happening for years.

Despite many people finding it offensive and racist, the decision was made to keep the name.