This doggo deserves a crown! 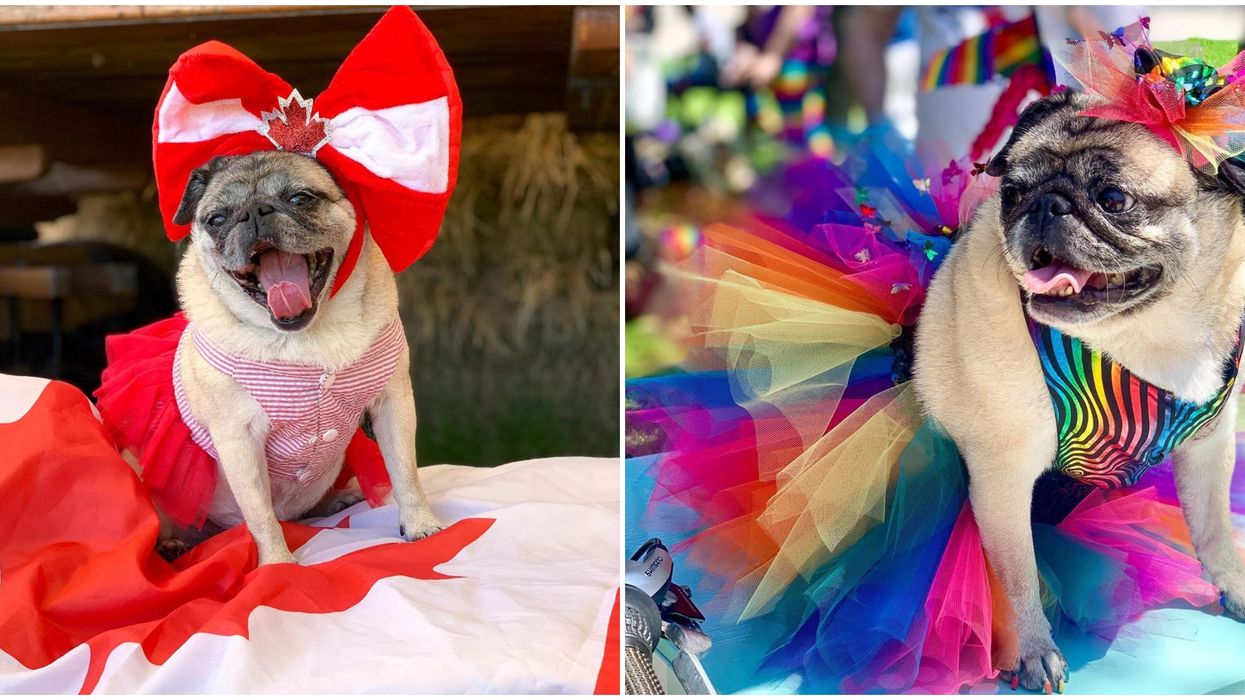 Shantay, you stay! An adorable Toronto dog is recreating famous looks from RuPaul's Drag Race and they’re so sickening, even the Queens are taking notice. So start your engines, because this pug is about to make your heart race.

Miss Pickles, often referred to as "the drag dog of Instagram" started her Drag Race journey in April 2019 after her Drag Mother, Margaret Skorka was inspired by one of the season 11 looks.

“I decided to recreate Vanjie's "farm-to-runway" look and I posted it to Miss Pickles' Instagram. The photo got so much attention and actually Vanjie reposted it on her Twitter and her Instagram story,” Skorka told Narcity via email.

“For a long time, I have been a huge fan of Drag Race and getting that repost was huge and made me super happy,” she explained.

To date, Skorka and Miss Pickles have recreated over 60 looks from the famous series.

But that’s not all, as Miss Pickles has quite the impressive resume even outside of her Drag Race fame.

The doggy fashionista has been featured in Superbowl commercials, Now Magazine, and a CBC documentary titled Pugly: A Pug's Life.

Skorka makes all of the outfits by hand, mostly with hot glue. She tells Narcity that a look can take anywhere between one and three hours to complete.

Miss Pickles, as Skorka explains, get’s excited to put the outfits on because she associates them with snack time.

“When its time to take pictures and put the outfits on, Pickles gets super excited cuz she knows its treat time and she starts doing "zoomies" and runs to the photo set.”

Skorka says she makes all of the outfits lose and comfy and always tries to limit photo shoots to under five minutes.

Miss Pickles has come a long way since her days at the Pugalug Pug Rescue. She's already made an appearance at Drag Con and has been featured on the World of Wonder Youtube channel as well.

Which leaves us wondering, when will RuPaul announce Drag Race Dog Stars?

Just imagine it. "The time has come for you to bark for your life. Good luck, and don’t ruff it up."

You can see more of Miss Pickles' iconic looks on her Instagram page.

And while we're talking about Toronto's most adorable dogs, don't forget about style guru Iggy Joey either.

Hopefully, this has brought a little pawsitivity to your day.