Sanders reacted in the cutest way to his meme fame. 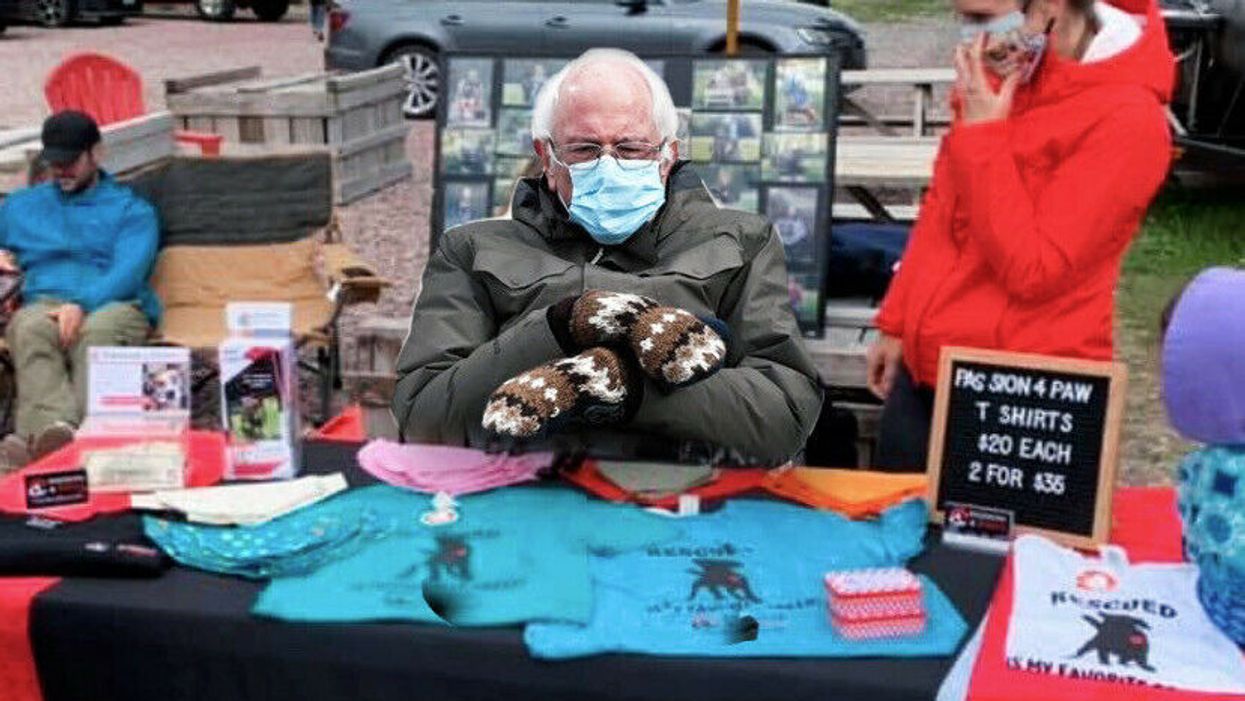 By now, pretty much the whole world recognizes the "Grumpy Bernie" meme and the obsession around it.

Now, you can buy your very own merch with the famous pic of Bernie Sanders and the proceeds will go to good causes.

It turns out actually to be a good thing, and not only a fun thing. Bernie Sanders

In an interview on CNN Sunday night, Sanders reacted to the meme and shared that "Grumpy Bernie" merch will be sold nationwide and the proceeds will benefit programs like Meals on Wheels.

When asked if he was enjoying the meme as much as the rest of the world, Sanders beamed an uncharacteristic smile and shared he's having a lot of fun with it.

"Not only are we having fun... we’re going to be selling around the country sweatshirts and T-shirts, and all of the money that’s going to be raised... will be going to programs like Meals on Wheels, that feed low-income senior citizens," said the senator.

Last night, Bernie shared an official link to the merch on his Instagram, which is called the "Chairman Sanders Collection."

If you're dying to get your hands on a pair of the OG mittens so you can rock the full Bernie look, you'll have to pay a steep price.

The mittens, which were hand-made by Vermont teacher Jen Ellis have been in high demand since Sanders went viral.

I made Bernie’s mittens as a gift a couple years ago. They are made from repurposed wool sweaters and lined with fl… https://t.co/sBhkUSSaeV
— Jen Ellis (@Jen Ellis)1579572860.0

Ellis shared that she gave the mittens to Sanders as a gift a few years ago, which she knitted from repurposed wool sweaters and fleece made from recycled plastic bottles.

Since the inauguration, Ellis' mittens have been selling for thousands of dollars on eBay for causes like Passion 4 Paws and she donated other pairs to Outright Vermont for auction.

But, other than the few pairs that she's donated to good causes, Ellis said she won't be taking orders anytime soon.

For now, you can place a bid for a pair of the famous mittens on eBay or snag a t-shirt from Sanders' official merch shop to show your love for "Grumpy Bernie."

Deals United States of America
Discover Narcity
Get the latest and greatest stories every day in your inbox.

Following a call with the prime minister over the weekend, premiers from across the country are responding to Doug Ford’s calls for COVID-19 resource support in Ontario.

According to Global News, the Ontario premier called for vaccines to be rerouted from Atlantic Canada, as the province continues to deal with rapidly rising cases of COVID-19.

Only MPs and some staff had access to the video call.
Leafsfan67 | Wikimedia

After a Canadian MP's naked picture was captured in a video meeting mishap, there are calls for an investigation to find out who shared the photo with the public.

A statement from Mark Holland, the chief government whip, who is responsible for ensuring the Liberal party members are attending and up to date on the business of the House of Commons, called for cooperation in an investigation being undertaken by the Speaker's Office.

Calling all Ryan Reynolds fans! These old photos are so adorable and hilarious that you'll probably end up loving him even more than you already do.

You can find them by scrolling through his Instagram, which is a treasure trove of snaps from his childhood.

7 Photos Of Canadian Celebrities As Kids That Are Adorably Awkward

Looking back through old photos can sometimes make you cringe and that's no different when it comes to snaps of Canadian celebrities when they were young.

Here are seven adorably awkward snaps of some of the country's most well-known people as kids.