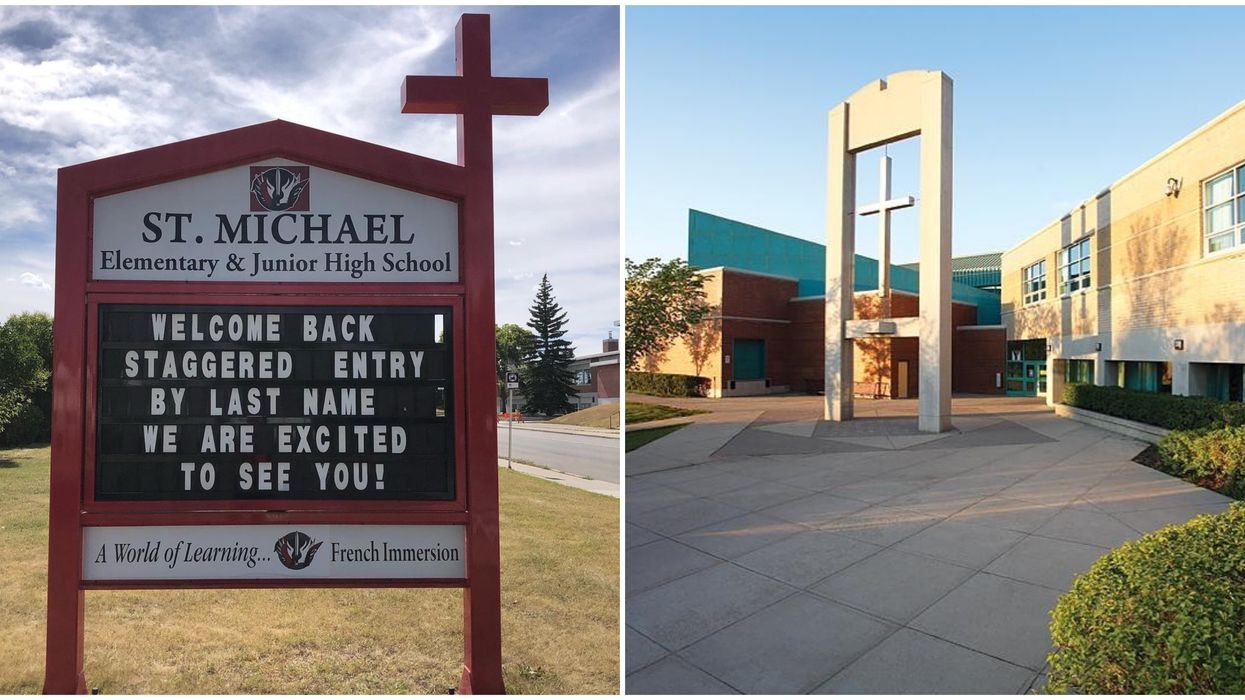 On Wednesday, October 7, a recording surfaced online of Calgary Catholic School District staff using the slur in front of students. This is the second recording in a week that reveals CCSD employees using the word. In an email sent to Narcity, BLM YYC said the two incidents show that most people know saying the slur is wrong, but do not care about the impact it has.

"Using that word from a place of privilege is hate speech," said BLM YYC.

The group believes there has been more than enough discussion around not saying the racial slur, therefore people who do so should face consequences.

They want to see CCSD reprimand the teachers involved and apologize to their Black students, but also hope that the school board will go beyond that.

What videos are being referred to?

The first recording was posted on the Black Youth Collective YYC Instagram page on Friday, October 2. In the audio recording, you can hear the principal of St. Michael School, Lianne Anderson, allegedly saying "how come it’s okay for you to say n*****?"

It appears to be just a snippet from a larger conversation Anderson was having with a group of Black students about the racial slur.

"I think the whole point was to kind of clarify that, bottom line, the use of the word is just generally unacceptable for anyone," Borowski told CBC.

Black Youth Collective YYC then posted another recording on Wednesday, October 7 of a second incident. This time it involves a substitute teacher at Bishop McNally Highschool.

In the video, you can hear the teacher referring to black licorice as "n***** babies."

According to Black Youth Collective YYC, the comments were made to a group of Black students and the post claims that the teacher also commented on how only "Black boys" can use the term.

"We recognize that this term was used in the '60s, but this is 2020 and once again, this teacher should have known better," Black Youth Collective YYC said on Instagram.

What is BLM YYC's message following the videos?

Black Lives Matter YYC said in the press release that this type of behaviour has to stop and students should not be punished for shedding light on the issue.

It continues to say that a school’s priority should be to protect children and create a safe environment.

"Racism is not new in Calgary, folx are still safely practicing racism from their positions of power every day," said BLM YYC.

What actions are being taken?

The group started an online petition after the first recording surfaced and it has already collected more than 2,100 signatures.

In an email to Narcity, the Calgary Catholic School District wouldn't comment on either video specifically but said they are continuing their work in education around racial justice.

"[We] are looking at ways for students to feel safe in reporting any instances of racism, bullying, harassment and discrimination,” said a CCSD spokesperson.

"He is way better at handling it than I am."

Gurkiran Kaur Sidhu and Jagmeet Singh are prominently in the public eye and for better or worse, being public figures sometimes comes with online and real-life hate.

Sidhu is a fashion designer with an Instagram following of 139K and her husband is the NDP leader, known prominently on TikTok for his political videos with over 800K followers on the platform.

Both students say they can't complete their programs online.

Seneca College students Mariana Costa and Crystal Love are reportedly preparing to sue their college over its COVID-19 vaccine mandate.

In a press release, Seneca College announced that students and staff will need to be vaccinated to return to campus on September 7, 2021. However, the college also stated that it would be accepting medical exemptions.

There are a few ways to cast your ballot while at school.

As it gets closer to the day Canadians go to the polls, Narcity spoke with Elections Canada to get all the details on how to vote in Canada's federal election if you're a student.

The Vote on Campus program, which allowed students to register and then vote at school, has been scrapped for this election.

Stop procrastinating and get that money.

If you're one of the many post-secondary students returning to in-person learning this fall, it might be time to check out some Ontario scholarships.

Don't worry, you don't have to be a genius to score educational funding, in fact, some of the smaller scholarships can be acquired by filling out a survey.