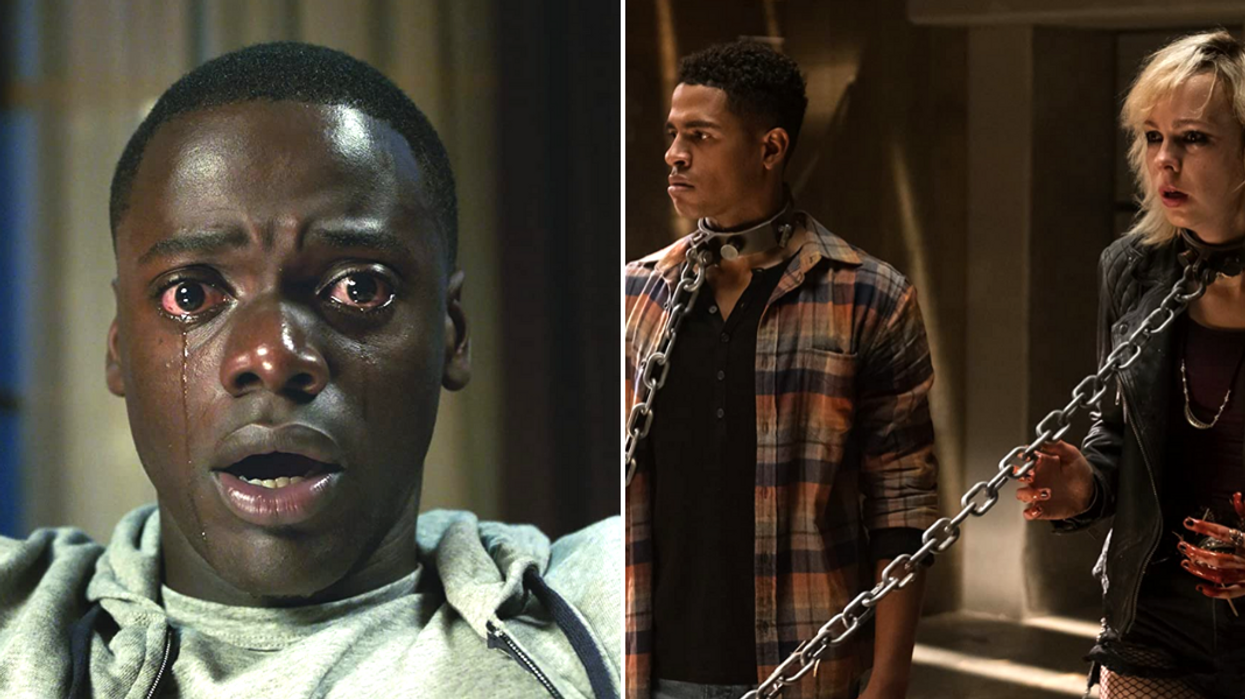 Need a good scare? Films get us in all sorts of moods, happy, sad, excited, but sometime’s people want to feel absolutely terrified. While it isn’t Halloween just yet, these horror movies on Netflix will get you into that spooky mood you’ve been craving.

According to viewers, these are the best scary movies on the platform, so you know that at least one of these films will give you the jitters.

Grab that popcorn, snuggle up with a good blanket, and buckle up for a binge-fest that’ll definitely have you sleeping with the lights on.

If you’re more in the laughing mood, you can check out some of these comedies on Netflix that are also audience approved!

Rose invites her boyfriend Chris for a weekend getaway to meet her parents. He’s extremely worried about their reaction to their daughter being in an interracial relationship but could never have predicted the truths he finds beneath their odd actions.

In a world where mysterious creatures hunt humans by listening for a sound, a family struggles to survive in silence.

A husband and wife throw a dinner party for their closest friends but soon start to realize that the hosts may have a sinister motive.

A family, that includes a teenager who lost their hearing, seek refuge after the word is attacked by creatures who hunt by sound.

Audience Rating: 71% on Rotten Tomatoes Accidently killing her husband during bedroom activities, a woman begins experiencing supernatural encounters as she remains handcuffed to her bed.

Law enforcement officers are confused after a series of murders send them on a hunt pointing at a criminal that has been dead for years.

A deaf writer who heads to a cabin in the woods looking for solitude is instead confronted with a masked killer.

If you’re not really feeling in the scary mood, this horror-comedy follows a college student who teams up with unconventional people in order to survive a zombie apocalypse.

With her husband at a war, a mother is convinced evil spirits are at work while struggling to care for her daughter alone.

A little girl confides in her sister about the ghost living in their childhood home. Her sister investigates with a psychic and discovers just how evil the presence is.

Five orphans discover a mirror in their orphanage that is host to evil spirits.

A pregnant woman’s ghost seeks revenge on her killers.

Three teens decide to rob a rich blind man but soon find themselves in a lethal game with the homeowner.

Based on the classic novel, Dracula sets out on a hunt in London for a woman who resembles his wife.

From Dusk Till Dawn

Two brothers, who also happen to be robbers, set out on their biggest and most horrifying escapade yet.

Dawn of the Dead

People must learn to survive when a worldwide plague causes a zombie apocalypse.

A Light Will End

A writer is plagued with her childhood demons when she returns to her hometown after years of being away.

Two brides find one another following the tragic events that plagued both their weddings. They soon discover they’ve been cursed.

A couple is haunted by the supernatural after killing a young girl in a hit-and-run accident.

A videographer thinks she’s found her perfect subject until he unveils what evil lies hidden behind his facade.

A video game creator finds herself confronting her worst demons before she becomes the next victim in her town’s recent string of murders.

Things not only get dirty but scary when a woman threatens to get between a pair of “star crossed lovers.”

A man wakes up to his partner dead in the bed beside him. He must fight to prove his innocence and figure out how he ended up a murder suspect.

A girl attempts to control the demon that controls her in the night hours while also confronted with two love interests that happen to be her childhood friends.

An unethical doctor and his colleagues are haunted by the ghost of one of their experiments.

Danur: I Can See Ghosts

Risa has been befriending ghosts for years, until one day an evil spirit threatens to capture her sister.

Seven college students who are skeptical of the paranormal spend the night at a haunted hotel.

After being hidden for seven years of her life, a little girl escapes into the real world. Although she may not be evil her powers can be catastrophic.

Errementari: The Blacksmith and the Devil

A blacksmith captures a demon and tortures him for inflicting misery on his life.

Two friends head on a vacation to Scotland where they discover their feelings for one another. They’re soon after confronted with an impossible decision.

Revenge of the Pontianak

A wedding is crashed by a vampire ghost looking to inflict revenge on the groom.

A minister who investigates cults must ask for help after encountering a new cult with “mysterious origins.”

A private detective is sent to investigate a suicide that gets him intertwined with the supernatural.

The Legacy of the Bones

A detective is asked to take on a murder case that brings back the terrifying memories of her time investigating a string of murders the previous year.

A divorced couple is brought back together after they discover their home is being haunted by the ghost of their young son.

A futuristic prison made up of hundreds of floors tests it’s prisoners by dropping one platform of food each day. The greed of those above causes the death and chaos below.