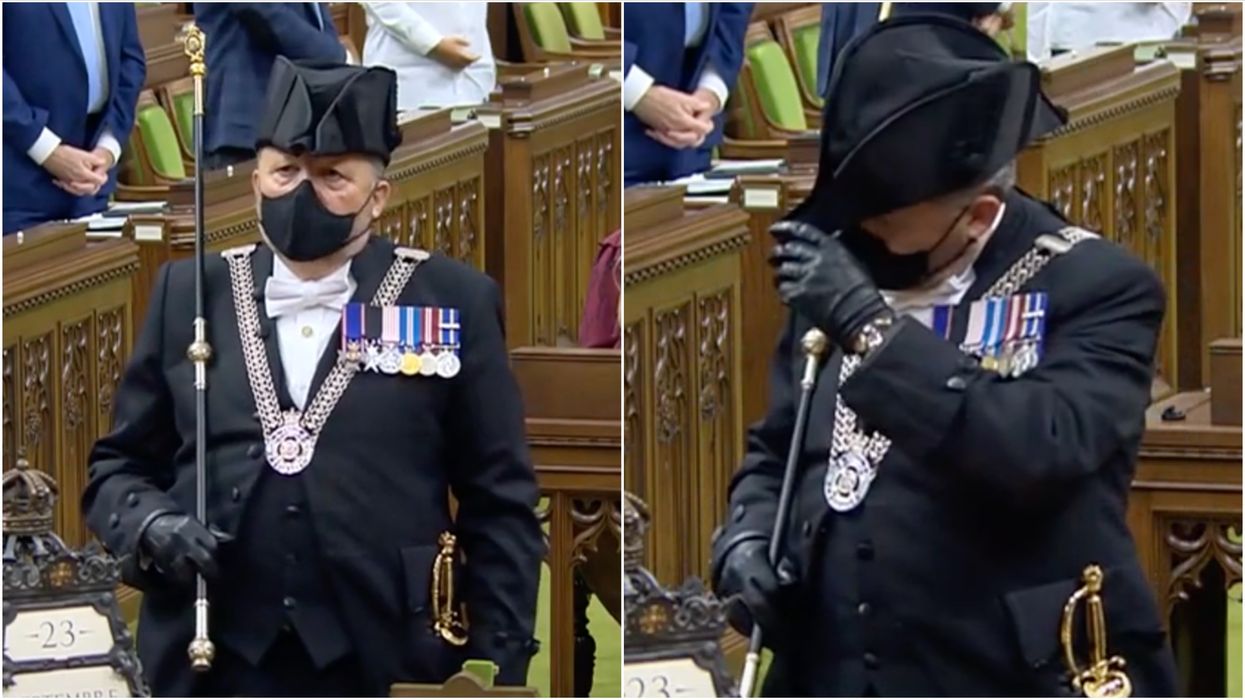 It was a busy afternoon in the Senate on Wednesday. Despite a make-or-break throne speech and a bunch of protesters, it was the masked Usher of the Black Rod that totally stole the show. According to the Senate, he actually has a very important role!

If you tuned in to Justin Trudeau’s throne speech on Wednesday afternoon, you may have noticed a man donning a blask mask and a fancy-looking hat.

If you did spot him, you weren't the only one.

Canadians across social media were extremely interested in this individual’s role in the proceedings and had plenty to say about his job title.

According to the Senate, the Usher of the Black Rod, or “the Black Rod” for short, has an important role to play in this kind of ceremony.

The Black Rod’s main duty during a throne speech is to lead the Senate Speaker’s parade into the Senate Chamber.

He’s also required to summon MP’s to the Red Chamber.

If you were wondering where the "black rod" part comes from, there's an explanation for that, too.

Editor's Choice: Trudeau Says It's 'All Too Likely' Canadians Won't Get Together At Thanksgiving

This is the Usher of the Black Rod. The mask makes him look bad ass. Parliament Throne Speech in the middle of a pa… https://t.co/DebIWc4BVO
— Joel Niddrie (@Joel Niddrie)1600897938.0

According to the Senate, his name comes from one very specific accessory he carries with him.

“The Usher has to knock three times on the House of Commons door with the base of his black rod to deliver his message,” it explains.

The rod is described as an “ebony cane” that is carried as a symbol of authority.

If this all sounds a little bizarre, it may be because the role is pretty old. In fact, it’s a parliamentary tradition that's been around for 600 years!

Canadians on Twitter had plenty to say about this role during the throne speech.

“The Usher of the Black Rod. Now there's a LinkedIn profile job title that'd get some hits,” wrote one Twitter user.

Another asked, “How does one become the usher of the black rod? Asking for a friend.”

While one Twitter user described the role as scary, another asked, “Where can I get an usher of the black rod halloween costume?"

During Wednesday’s throne speech, protesters showed up and chanted during the national anthem.

After the statement, which failed to mention a CERB extension and paid sick leave, NDP leader Jagmeet Singh described it as “empty words.”

Trudeau now relies on support from at least one other party to avoid a federal election in the fall.