'Tis the season for taste testing! 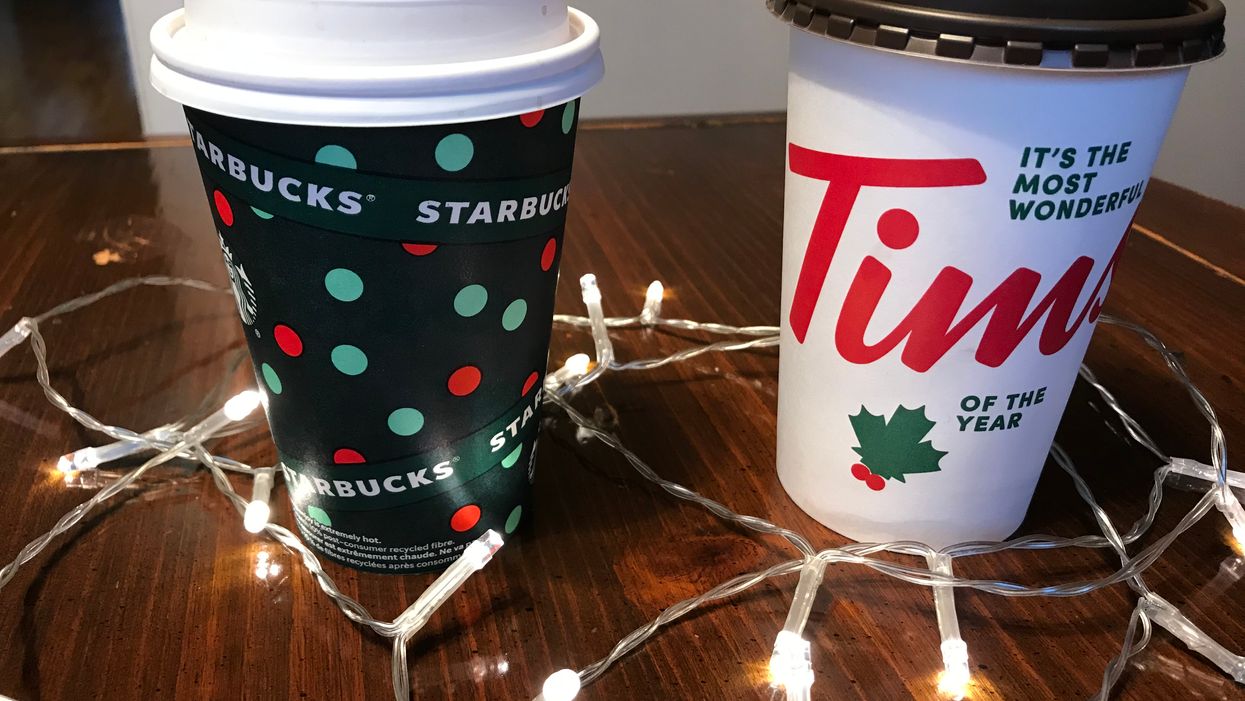 'Tis the season for taste testing! With Starbucks' peppermint hot chocolate coming out and Tim Hortons' candy cane hot chocolate back on the menu, I tried both to see which one reigns supreme.

Whether it's the looks, the taste, or the amount of holiday cheer, this is my honest opinion of these seasonal sippers.

Editor's Choice: A New 'Family Photo' Of Justin Trudeau & World Leaders For The G20 Has The PM Standing Out

This time of year doesn't just mean holiday beverages but it also includes festive packaging too.

For Starbucks, that means a green cup with seasonally coloured polka dots and green branded ribbon wrapping around it all.

Tim Hortons took a simple approach with a white cup and their typically red logo but to make it merry, they added a sprig of holly and some extra text around it so now it reads "It's the most wonderful Tims of the year."

Once you open the lids, however, it's pretty lacklustre. If either of these drinks had whip cream on them at any point, as they do in the promo pics, it's long gone.

The first one definitely has more mint flavour to it and even leaves a slight seasonal aftertaste. However, the chocolate doesn't really stand out. Starbucks doesn't make them overly sweet either.

Tims, on the other hand, leans into the chocolate flavour and the sweetness that comes with it. The mint, though, is a bit M.I.A. When I started with the smell test, I only got their regular hot chocolate aromas and nothing candy cane at all.

I was happy to see it had a bit of the festive flavours, and again a slight minty aftertaste, but it was also underwhelming.

Which one's the winner?

Obviously, neither of the drinks stood out but if I have to pick a winner I am going to go with Tim Hortons.

It might be my Canadian bias or the childhood nostalgia of ordering these as a kid, but I just found this one put me more into the festive spirit than Starbucks' version.

Not to mention, the price difference! While Tims costs you $2.82 with tax for a medium, a tall (the smallest size) from Starbucks will set you back $5.02 with tax.

Plus, I'm a sucker for a good pun so Tims' packaging won me over.

Unfortunately, the other potential contender in this seasonal showdown, McDonald's, has opted not to do a holiday menu this year so we'll never know if it gets better than this.

At the end of the day though, neither of them are bad. You could easily sip on both of these drinks to warm you up on a cold day, and that's my honest opinion.

The opinions expressed in this article are the author’s own and do not reflect the views of Narcity Media.

On June 21, the federal government announced updates to Canada's travel rules for fully-vaccinated travellers who are permitted to enter the country.

Here's what you need to know.

Alghabra said the flight ban between India and Canada has been extended for 30 days and will now be in place until July 21.