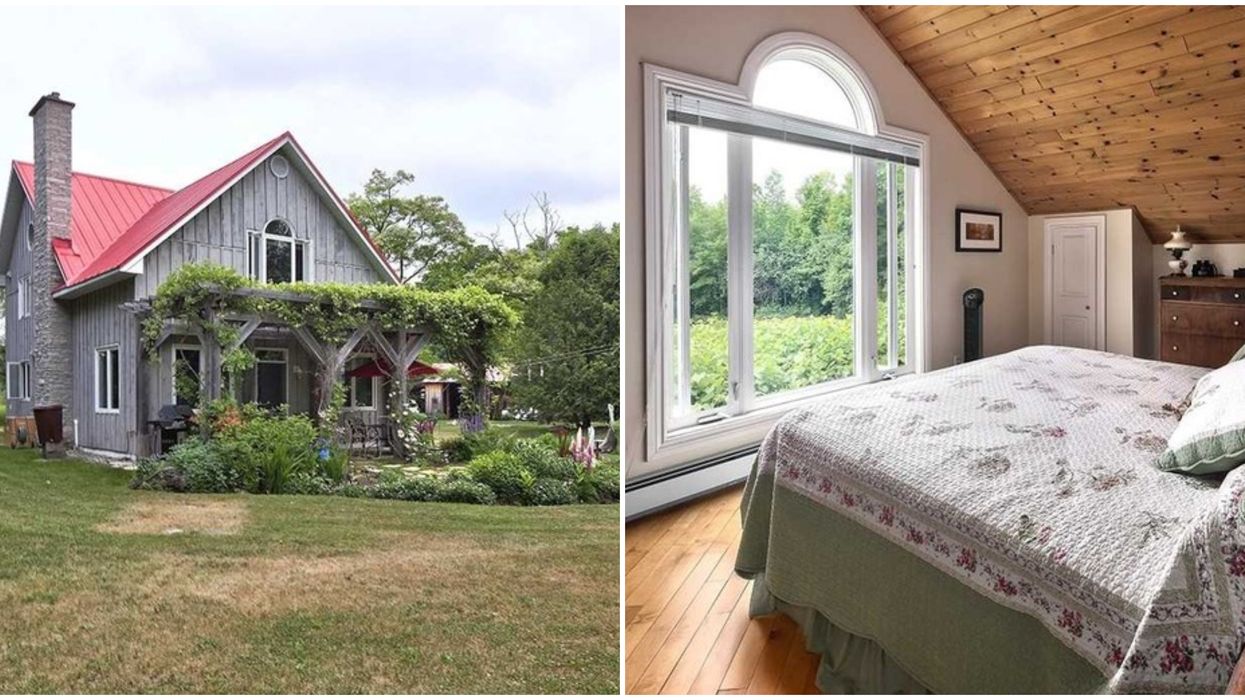 Once upon a time, there was a home that seemed to be plucked right from the pages of a storybook. This house for sale in Ontario is so adorable and looks like a fairytale cottage. Plus it's in the middle of nowhere which really adds to its magical vibe!

Located in the Georgian Bluffs area near the township of Chatsworth and the city of Owen Sound, this house is for sale and listed on the market for $774,900.

There are three bedrooms and two full bathrooms.

It's really secluded, nestled among lots of trees.

The house is on 100 acres surrounded by meadows, forests, wetlands and it even backs on to conservation land.

As a plus, it's so close to the waters of Georgian Bay and Sauble Beach along with the Bruce Peninsula

It's truly a nature lover's sanctuary.

Though the amenities of a city are nearby in Owen Sound.

It has a red roof, light wood siding and a stone chimney that really gives it that storybook vibe.

The vibrant colour of the roof makes the house stand out in the lush green landscape surrounding it.

However, it's the back of the house that really makes it look like a fairytale cottage.

While the outside gives off an old-time feel, the inside of this house is totally modern.

The kitchen has new appliances including an oven and electric stovetop.

There's also space for stools so people can sit at the counter.

From there, the space flows into an open concept living and dining room.

One bedroom is on the main floor while the other two are upstairs.

On the second floor, there's another living space with a ladder that leads to loft space.

It can be used as another sleeping area or as a cozy hangout space.

At the back of the house, the fairytale vibes really jump out.

There's a stone patio with moss peeking out between the slabs and a wooden pergola that has vines intertwining around the beams.

A stone path then leads out to the rest of the yard.

There is also a really big garden on part of the property that's perfect for working on that green thumb.

Description: In the middle of nowhere, this house is nestled among the trees and surrounded by vast swaths of wilderness. While it looks like a fairytale cottage on the outside, it's completely modern inside with three bedrooms and two bathrooms.