"The pain that I go through every day, it's not easy." 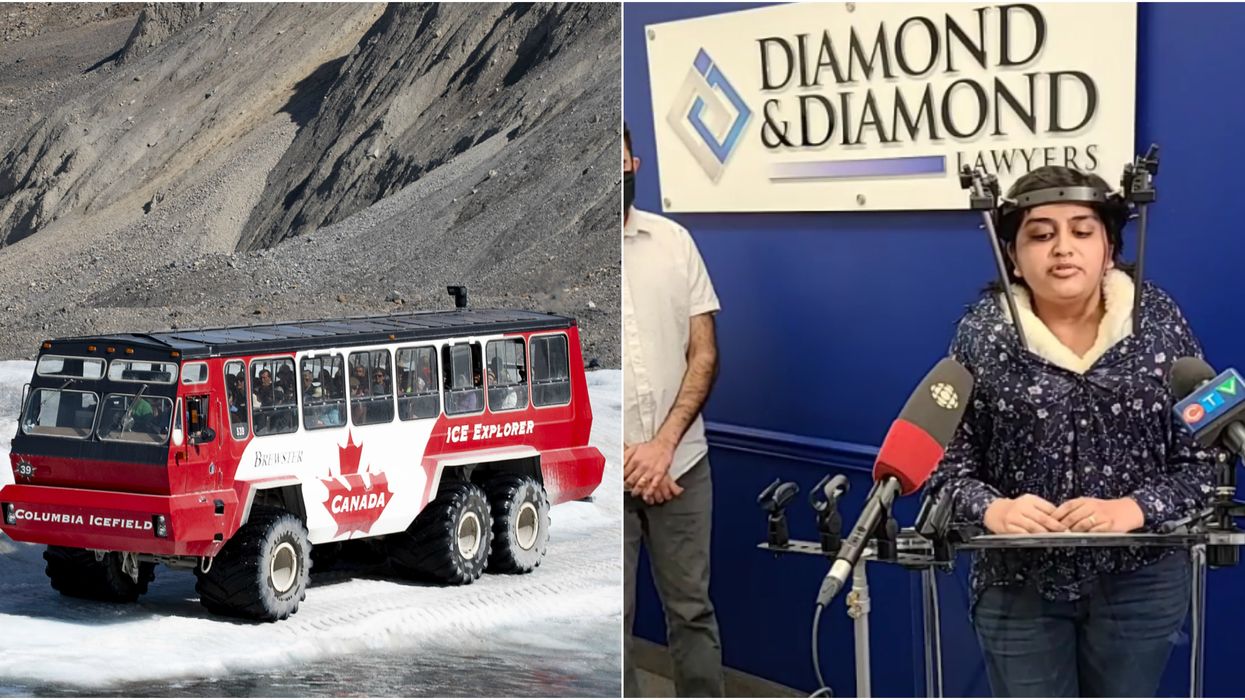 A class-action lawsuit has been filed on behalf of seven people that were injured or killed by the Jasper Icefield bus crash in July. The suit claims the company and driver were reckless and didn't ensure passenger safety, according to a press conference on Wednesday, September 30.

Sweta Patel, 27, and her husband Suraj, 31, both survived the deadly crash but have been left with serious injuries. They are two of the seven people who have filed the lawsuit.

Patel was in a halo head brace at the press conference and said that she lives in pain every day.

"Though I survived, I am left with devastating mental and physical injuries," Patel said.

She is now completely dependent on others and said her days are filled with visits to doctors and lawyers.

"I have over 20 fractures and the pain that I go through every day, it's not easy," added Patel.

Despite her injuries, she considers herself lucky. Her uncle and friend didn't survive the bus rollover.

Editor's Choice: Canadians Have To Pay Back Their Student Loans Again Now That The Freeze Is Over

What happened on July 18?

During a Columbia Icefield bus tour in July, one of the busses exploring the Athabasca Glacier went off the road and rolled roughly 50 metres downhill.

This crash killed three people and left the other 24 passengers seriously injured.

“Sometimes in your life, a quick moment can change everything. For me and my friends, July 18 was that moment,” Patel said in the press conference.

Emergency responders from nine local cities and towns responded to the call.

Due to the remote nature of the accident, Parks Canada helicopters were needed to get to the victims at the crash site. Shock Trauma Air Rescue Service (STARS) air ambulance then transported victims to a number of hospitals across Alberta, including in Edmonton and Calgary.

Who is involved in the lawsuit & what are they seeking?

Six survivors and the family of a victim who died have filed a lawsuit against the tour companies and bus driver.

The seven victims are asking for more than $17 million in damages.

Basil Bansal, a lawyer with the firm fronting the lawsuit, said at the press conference that the victims have suffered in many ways, ranging from spinal injuries and concussions to depression and PTSD.

“Overall, I think the lasting effect is the trouble my clients have had trying to get their treatments covered through this tour bus company,” said Bansal.

The lawsuit has a long list of allegations against the tour companies and driver but none have been proven in court.

The survivors claim the tour company didn’t make sure the bus was safe or do proper inspections, among many other things.

Against the driver, the accusations include not paying attention, going too fast, and acting recklessly.

What does this mean for the tour company?

Pursuit, the company that runs the Columbia Icefield tours,  said in a statement sent to the media on Wednesday, September 30, that the event last July was tragic and they continue to extend their deepest condolences to everyone involved.

“Since the incident occurred, we have been committed to supporting those involved in the incident, their families and our staff with any immediate and ongoing needs,” read the statement.

They claim that a multi-agency investigation into the cause of this tragic accident is ongoing and that the company will be transparent with the findings.

Narcity has reached out to Pursuit for comment and we will update this story when we receive a response.