He ended up walking off stage. 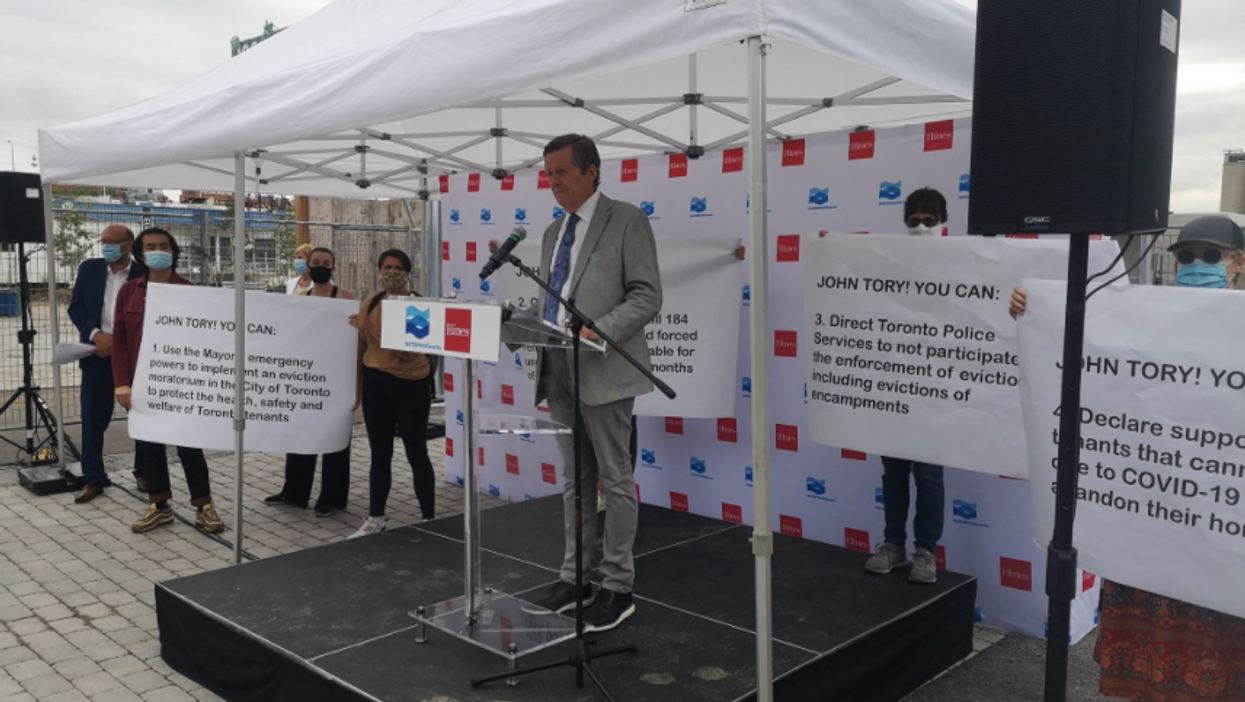 Things got a little heated at a Toronto press conference Thursday afternoon. Mayor John Tory was interrupted by tenants rights protestors while he was speaking on-site of a new condo development. The demonstrators were demanding an end to COVID-19 evictions in Toronto.

According to a press release, protestors from Parkdale Organize and People's Defense Toronto crashed the conference at 261 Queens Quay East while Tory was giving a speech.

Editor's Choice: Ontarians Are Being Told To Work From Home For The 'Foreseeable Future'

A handful stood on the podium with him while holding protest signs while another member yelled questions and demands through a megaphone.

At one point, the protestor mentioned the mayor's "million-dollar condo," to which he clapped back.

Tory retorted that "the longer you talk about that kind of thing the more you're going to lose credibility...You're also being discourteous to all the other people who are here."

The protests were in response to Tuesday's passing of Bill 184, which has raised concerns among renters due to the elevated risk of homelessness that they feel it will cause.

The bill is supposed to protect tenants and compensate them if they are wrongfully evicted.

However, demonstrators insist that the bill will make it easier to kick people out of their units due to the unsupervised landlord-tenant repayment program which it enables.

“It took hundreds of tenants paying a visit to Tory’s condo for him to read the Bill which had its first hearing back in March as the pandemic was unfolding and the province declared a state-of-emergency,” said Bryan Doherty of Parkdale Organize in a news release.

“Surely by now the mayor understands the disaster that will unfold if Bill 184 is allowed to be carried out in the city as intended.”

Global News reports that Tory ended up walking off the stage.

Before he did so, he asked protestors to wait until after the conference for a word with him.

However, one demonstrator responded with "Your ribbon cutting can wait," according to a tweet from Toronto Star reporter Jennifer Pagliaro.

While the province banned residential evictions at the start of the lockdown, that is expected to be coming to a close soon along with the end of the state of emergency, CP24 reports.

There have been several similar protests drawing attention to the issue of tenants' rights.