Drink every time he says "ostensibly." 😩😂 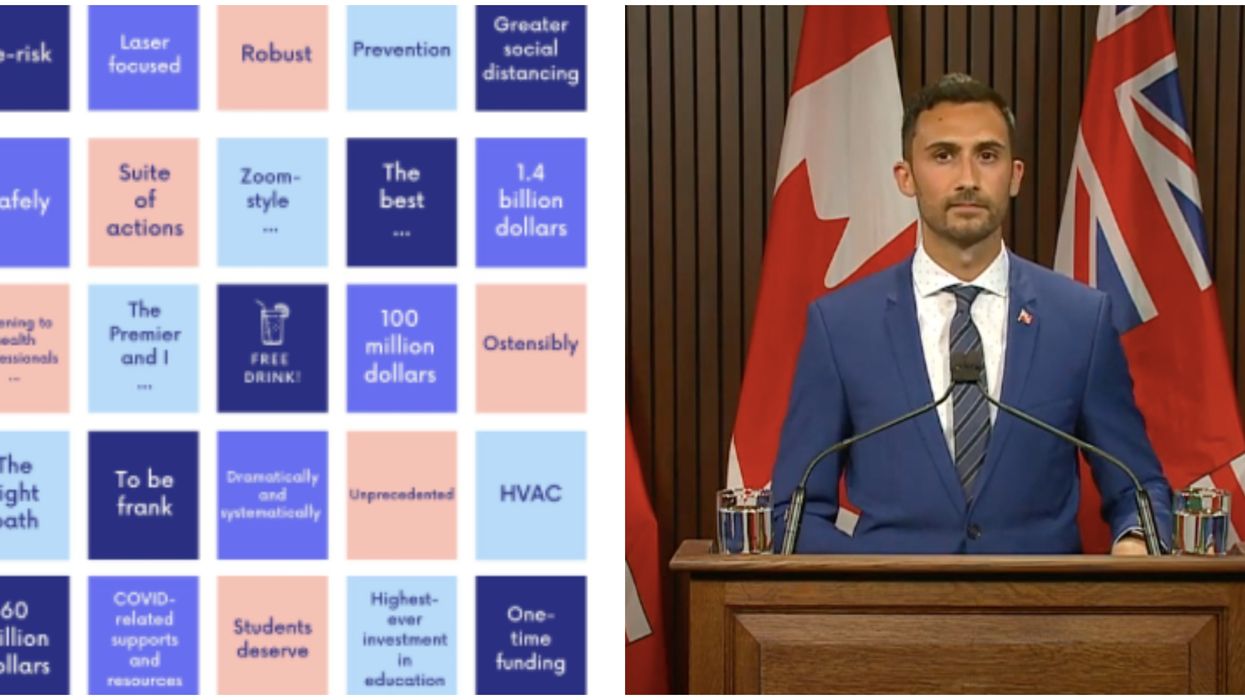 A Toronto elementary teacher has taken a creative approach to dealing with back-to-school stress.

After tuning into the province's daily updates this summer, Louisa Julius decided to create a Stephen Lecce drinking game to poke fun at Ontario's Education Minister and his favourite phrases.

The Lecce bingo card is to be used anytime the Education Minister is making an announcement or answering press questions, said Julius to Narcity.

Editor's Choice: Gas Prices Will Be Dropping Dramatically This Weekend Across Ontario

If you're a consistent viewer of Stephen Lecce's announcements and briefings, you'll recognize some of his most used phrases on the bingo card.

Its creator assured Ontarians that you don't need to drink alcohol to participate.

Julius expressed frustration toward the minister and the current back-to-school plan to Narcity.

“[I am concerned because] every time I turn on my television to hear Lecce speak, I am hopeful. I am hoping he will announce something new.”

Julius gave the example of the announcement of the addition of new heating, ventilation, and air conditioning (HVAC) systems for schools.

“Initially, when they announced $50 million for new HVAC systems, I was hopeful."

"But when I looked at the data afterwards, and looked at how 50 million plays out in individual schools, I realized that’s only approximately $10,000 per school."

In the 2018-19 school year, there were 4,828 registered elementary and secondary institutions in the province, meaning that Julius is indeed correct.

Each would only receive approximately $10,356 to install entirely new HVAC systems.

“I felt so optimistic, and then I felt lied to,” Julius explained.

“I’m left with anxiety of, do I teach my students or do I spend all day trying to protect my students' lives?"

Classes are set to begin as early as September 8 in Ontario.

Recently, Lecce announced that schools would be able to stagger their start dates.