Here's exactly what you need to know.👇 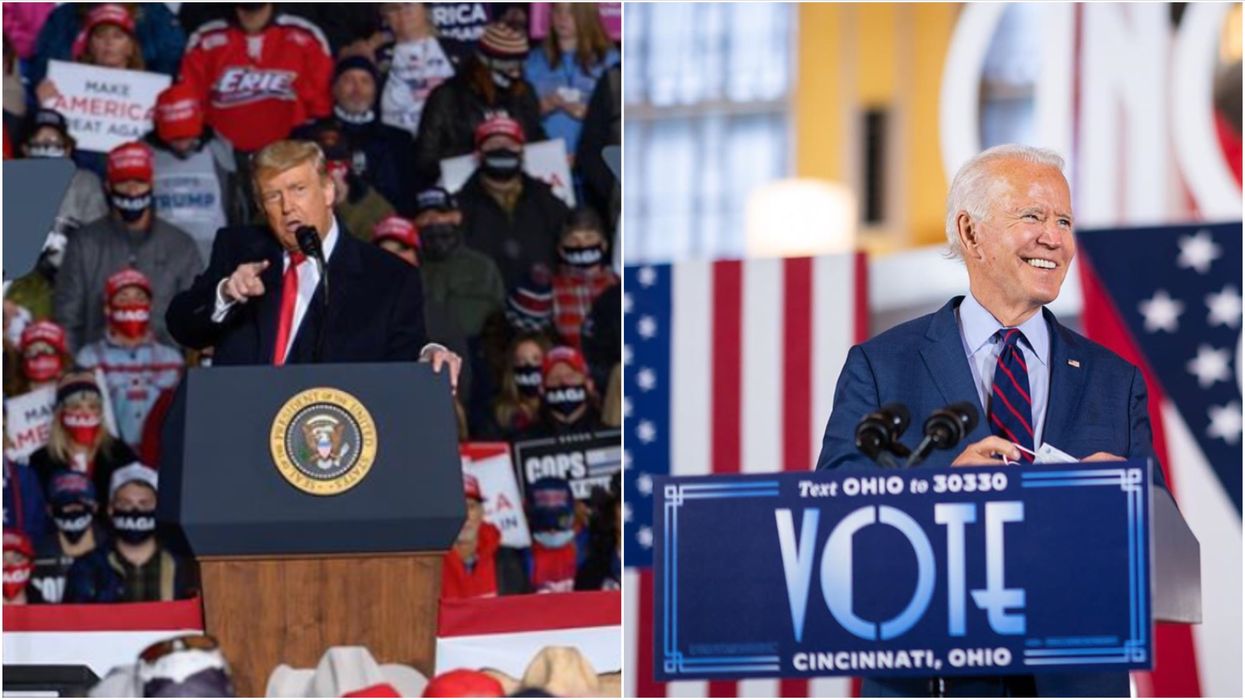 With no clear result as of Wednesday morning, many Canadians may be asking: “How does the U.S. election work?”

While the process is similar to Canada’s voting system in that the winner isn’t decided by a popular vote, it’s pretty different in many other ways.

As of Wednesday morning, neither Trump nor Biden had been declared the winner.

Thanks to an expected surge in postal votes, combined with the likelihood of a very close race, it could be days before America declares a result.

With that in mind, here's what you need to know.

How does the U.S. election work?

In the U.S., the political system is dominated by two parties, the Republicans and the Democrats.

This year, Republican Donald Trump is facing off against Democrat Joe Biden, and it’s looking like a very tight race indeed.

Just like in Canada, the presidency isn’t decided by the number of votes each candidate gets individually.

Instead, both presidential hopefuls compete to win electoral college votes.

Every U.S. state has a specific number of college votes, based primarily on its population size.

Across the country, there are 538 electoral college votes in total. To win the election, the presidential candidate must earn 270 of these or more.

This system means it’s possible for one person to win the popular vote but still be defeated in the election.

How long will it take to declare the winner?

While most American states are historically Democratic or Republican, there’s a few that vary year-upon-year.

These are known as “battleground states” or “swing states.”

Securing electoral college votes in these states can often mean the difference between winning and losing the election.

This year, the race is extremely close. This means that each and every vote, especially in the swing states, could make all the difference.

A surge in postal ballots, due to the COVID-19 pandemic, is also expected.

That’s why some officials are predicting it could be days — or even weeks — before an official winner is announced.

This isn't always the case, though. In 2016, Trump gave his victory speech at around 3 a.m. EST, the day after the polling stations closed.

What happens if there's no clear victory?

While unlikely, it’s possible that there could be a tie.

With 538 electoral votes available, the two candidates could secure 269 votes each.

It would then be down to members of Congress to decide what happens next.

The House of Representatives would vote to decide the president, while the Senate would choose the vice president.

Donald Trump has also claimed that he’d be prepared to launch a Supreme Court challenge with relation to the ongoing vote counting, although he didn’t explain what legal route he would pursue.

If he does, this could delay proceedings even further.

For now, though, all that's left to do is wait.