Things get weird for the heiress of a mysterious house in the neighbourhood. 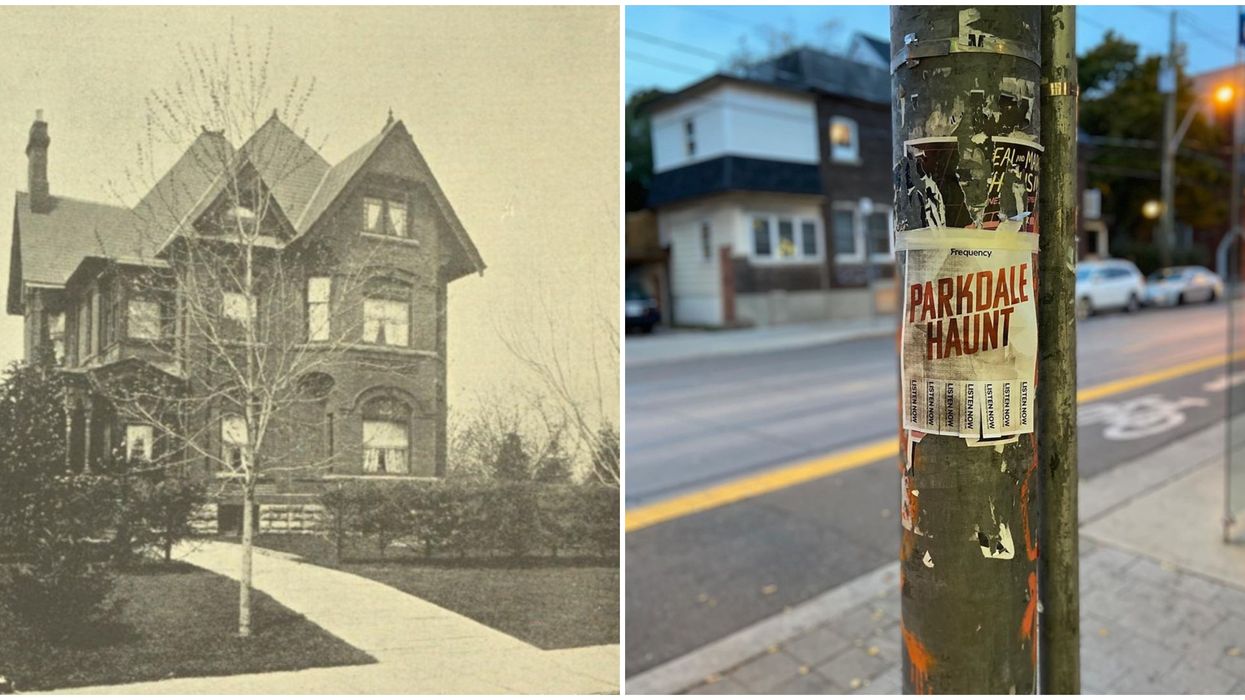 A local Toronto horror podcast set in Parkdale is has just made it to No. 1 on the Apple Podcasts fiction list.

Emily Kellogg and Alex Nursall's Parkdale Haunt is a fictionalized story of a Toronto woman named Claire who inherits a mysterious old house in Parkdale.

Her best friend, Judith, goes on a quest to connect the dots to understand the circumstances that led to Claire's unexplained disappearance by listening to audio recordings they had made while renovating the old house.

Editor's Choice: Visiting Tim Horton's Toronto Grave Is The Most Canadian Thing You Can Do This Halloween

As it turns out, the pair were inspired by the very real but also very scary Toronto real estate market.

"Alex and I had both gotten really into horror fiction podcasts a couple of years ago," says Kellogg, a writer and editor who's currently at work on her first novel. "We were both going through a stressful time and just found them to be a really great outlet."

And then they read a true Toronto real estate story, a piece called "My Reno From Hell," that gave them their idea.

"So our thought process was like, What if it was literal hell?"

They even had a real house in mind when they thought of the story, on Dowling, just north of King.

"There's just such an interesting history right? Because it used to be such a wealthy village before the Gardiner came and cut everything off," Kellogg says, referring to the expressway that cut Parkdale off from the lake in the 1950s.

"It's one of those areas of Toronto where it does kind of have this like dark energy."

Nursall, a casting director for a Toronto ad agency, says she has friends, in Parkdale and elsewhere, who've taken the podcast to heart.

"People have been like, 'I do not want to go in my basement. I have decided that basement is now bad," Nursall says. "'Thank you for ruining my basement.'"

So what is Parkdale Haunt?

Apple describes it as "a tale of cults, rituals and the Toronto real estate market." The podcast – which is No. 11 overall on Apple's podcast charts – is a sort of Blair Witchy take on what happens when a woman inherits a house from family she never knew she had, and how may or may not have been part of an especially nasty cult.

Much of the horror comes from sudden silences, unidentified noises, and a miasma of doom that drapes over everything like a shroud.

"One big thing was having the main characters be two women and also not having it be sort of like a romantic focus or anything," Kellogg says. "It's focusing on their friendship, it's focusing on their platonic relationship, and how it's sort of under stress with what's going on."

Kellogg and Nursall have been real-life BFFs for a decade.

What is the best thing about horror podcasts?

"The fun thing about podcasts is you can take them with you wherever you go," Kellogg says.

"I think there's something intimate about podcasts where you feel like you're a part of it in a way that's different from movies, this feeling like you have a closer connection with the characters, like you could be talking back to them," Nursall says.