By-law officers will be patrolling beaches. 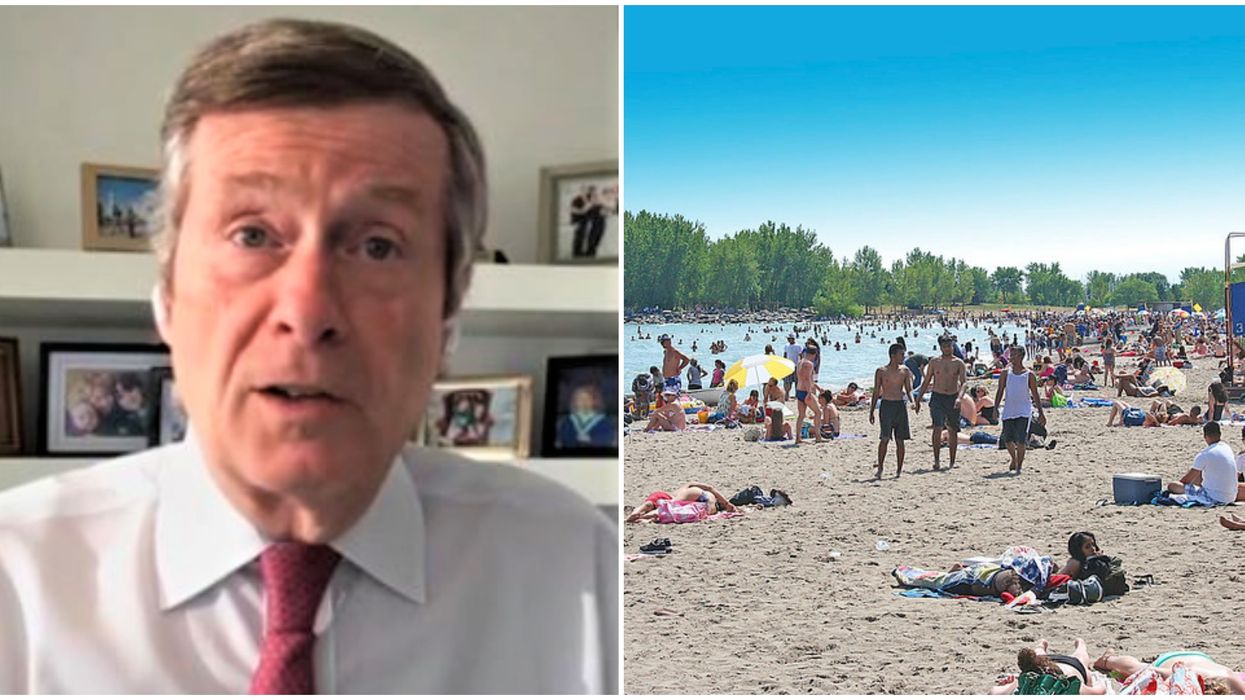 John Tory just wants Toronto to be sensible. After huge crowds flocked to multiple city beaches last weekend and left the places full of people and trash, the mayor is urging residents not to create the same problems this weekend. Crowded Toronto beaches and parks have been a cause for concern as the weather warms up and the city opens up further.

Huge crowds flocked to popular spots like Cherry and Woodbine beaches last weekend amid the hot weather, with most city amenities still closed.

However, now that Toronto is in stage two and more patios and other spots are reopening to give people more choice, Tory has expressed his hope that those crowds won't be repeated this weekend.

Tory told CP24 on Friday, June 25, that he's hopeful people will act responsibly ahead of the nice weekend ahead.

“I hope people will use a degree of personal responsibility and not respond to the sort of social media siren call and say you have to get over to one place to have a big party,” he said.

The mayor noted that Toronto has 1,500 parks to choose from, and that we don't need to all gather in the hot spots.

Friend just sent me this and said “You’re missing out” this happening now at Cherry Beach, Toronto. What am I missi… https://t.co/xpC2lZhrmq
— TakeOffFox (@TakeOffFox)1592695389.0

“Let’s just be people that are going to have a good time but do it in moderation and that means don’t take big cases of booze to the beach and don’t everybody go to the same place. You don’t have to," he said.

Tory also addressed the significant trash that has been seen left behind on shorelines and in green spaces.

Throwing Covid caution to the wind Timelapse of the events this weekend at Woodbine Beach, Toronto.😠😤 @JohnTory… https://t.co/8Cnl8TemGm
— Dewucme (@Dewucme)1592825720.0

According to The Weather Network, it's going to be another scorcher all weekend, with a 27 C base temperature forecasted on both Saturday and Sunday.

So it's understandable that Tory sounds concerned, given what happened in last weekend's heat.

However, the city will be dispatching more by-law officers to known hot spots this weekend to make sure no more beach parties happen.

@JohnTory sorry but it is not a beautiful Sunday. Just walked through Cherry Beach. Disgraceful mess with Garbage.… https://t.co/snwdBsoYji
— JACleuty (@JACleuty)1592747134.0

“Let’s have a good time but let’s spread ourselves out and focus on the fact that we do not want this virus to take us over again just as we are getting out of it,” Tory said.

The City also tweeted that there are now extra garbage and waste disposal on the beaches in a move to get people to stop littering.

Toronto wants people to do better.