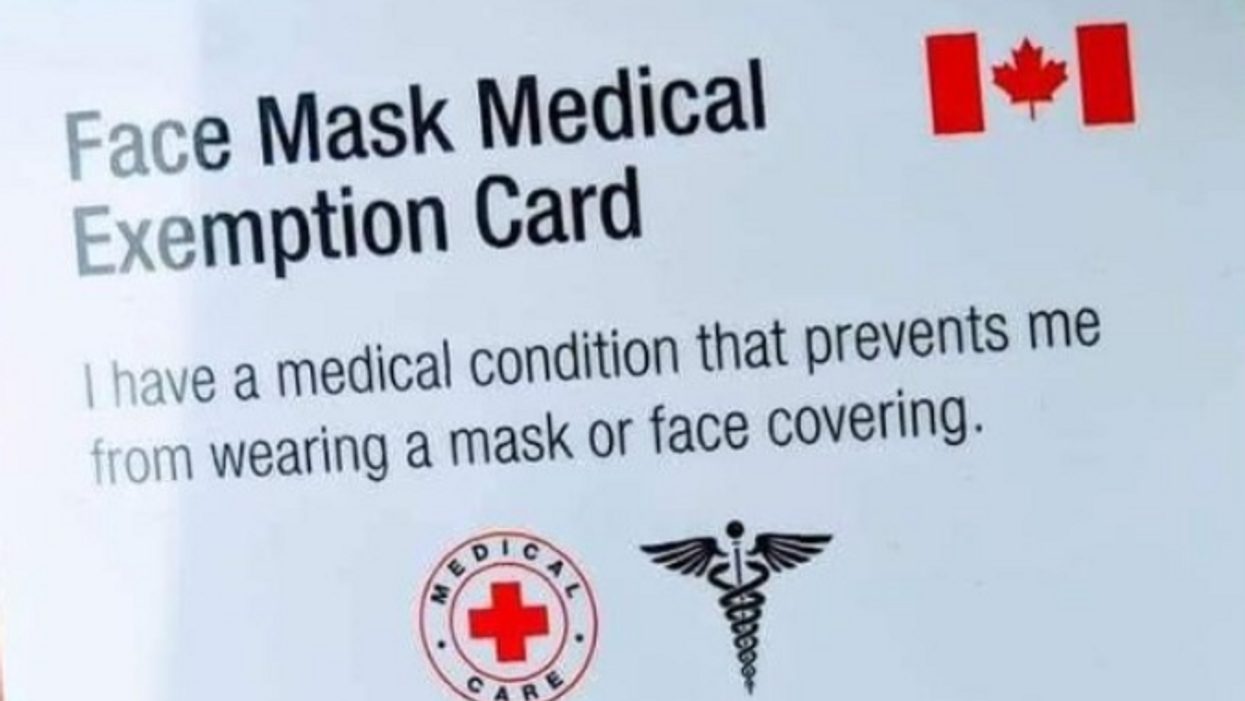 It looks like people are going to great lengths to try to find ways to avoid wearing masks. Recent days have seen news of face mask exemption cards being distributed around Canada. On July 15, Toronto staff confirmed the cards are fake and condemned the scheme.

In the last few weeks, several regions have made mask-wearing mandatory in indoor public spaces, including the City of Toronto.

Over the last few days, Canadians have been warned that cards claiming people have a medical condition that excuses them from covering their faces are not legitimate.

The public is being warned these fraudulent cards are apparently being created by anti-mask groups.

"I have a medical condition that prevents me from wearing a mask or face covering," reads the card.

The cards are not endorsed by any public health unit, especially Toronto.

In fact, Toronto Public Health stated on Wednesday that if you really are exempt for medical reasons, you don't need a card like this to prove it.

"We are aware of face mask exemption cards being distributed in TO. Businesses are not permitted to require proof of an exemption if you are unable to wear a mask for medical reasons. These cards are not endorsed or provided by TPH," reads TPH's tweet.

Mayor John Tory also shared during the City's live briefing on Wednesday that there are always "scams" like these around, and people who have a real reason for not wearing one know that a card is not needed.

The card itself carries the Red Cross sign, which the Canadian Red Cross states is being used without its permission, per CBC.

Ontario Premier Doug Ford also addressed the scam on Wednesday in his own briefing.

"I heard about that, and first of all, I want to thank the Red Cross, what a great organization. It's unfortunate that people are using their logos, and I understand they're going to possibly be taking action," said Ford in response to the cards during his July 15 briefing.

"When you go into stores, wear a mask. If you don't have a mask, wear a face covering. As far as I'm concerned, it's totally unacceptable."

It's no secret that not everyone in Toronto agrees with having to wear face masks, and some people have been pretty vocal about it.

A small group of anti-mask protestors recently took over parts of Dundas TTC subway station to show their disapproval.

Earlier this week, though, Ford suggested that Canadians could be wearing masks regularly for "a number of years" to come.