There's been hiccups, a hair flip and that "speaking moistly" moment. 🤣 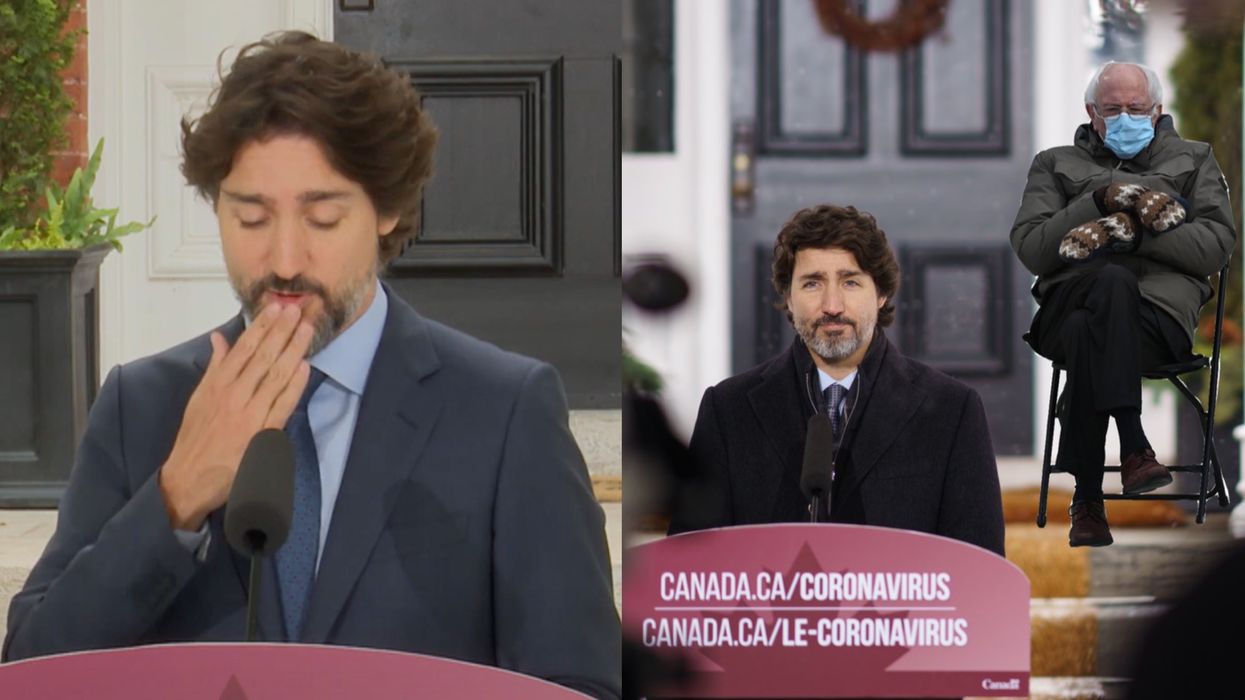 Way back in March 2020, Justin Trudeau delivered the first of many COVID-19 press conferences in Canada.

Around one year later, the prime minister continues to share updates about the ongoing pandemic from Ottawa.

In the 12 months between Trudeau’s first and most-recent COVID-19 briefings, there have been plenty of serious and significant updates.

However, there have also been plenty of less serious moments, with some even going viral for being so hilarious or ridiculous.

Here’s a look at some of the PM’s press conference highlights:

Throughout the pandemic, many Canadians have been fascinated by the prime minister’s ever-changing hair.

Back in April 2020, one press conference clip ended up going viral after Trudeau did a hair flip while being asked a question.

Without breaking eye contact with the camera, the PM ran his hands through his hair and the internet went wild for it!

In May 2020, a wasp got all up in the PM’s face during a daily briefing, causing him to swat several times during the conference.

The pesky bug even landed on his eye at one point, although Trudeau was pretty laid back about the whole thing.

It was described as a “peak Canada” moment back in March 2020 when Trudeau had to rush back into Rideau Cottage to get his jacket.

"Just before we get to questions, I'm supposed to model healthy behaviour," he said. "I'm going to go grab my coat and I'll be right back!"

During one COVID-19 address back in June, Trudeau got the hiccups uncontrollably for over ten minutes! At one point, he even hiccuped pretty loudly mid-sentence.

It went viral on Twitter shortly after, with one person joking, "Do a shot every time Trudeau hiccups."

In November 2020, one of Trudeau’s kids decided to make a surprise appearance during one of his COVID-19 press conferences.

Photos and screenshots from the briefing show a tiny face peeking out from the Rideau Cottage window.

Following Joe Biden’s inauguration, when Bernie Sanders memes were all over the internet, Trudeau jumped on the trend to make his own version.

“It was one thing when my son crashed my press conference a month or so ago, but this... Now is not the time to travel. Stay home - and by that, I mean your own home," he joked.

Arguably the most iconic moment to come out of all of Trudeau’s conferences was the “speaking moistly” moment back in April 2020.

The prime minister was discussing face masks, telling Canadians they “protect others more than it protects you because it prevents you from breathing or speaking moistly on them."

The awkward word choice inspired Canadian beers, lip balms and a music video that was one of 2020’s top trending videos in Canada.

Although the PM says he doesn’t regret saying it at all!