This is NOT the way to enjoy the Super Bowl. 😅😷 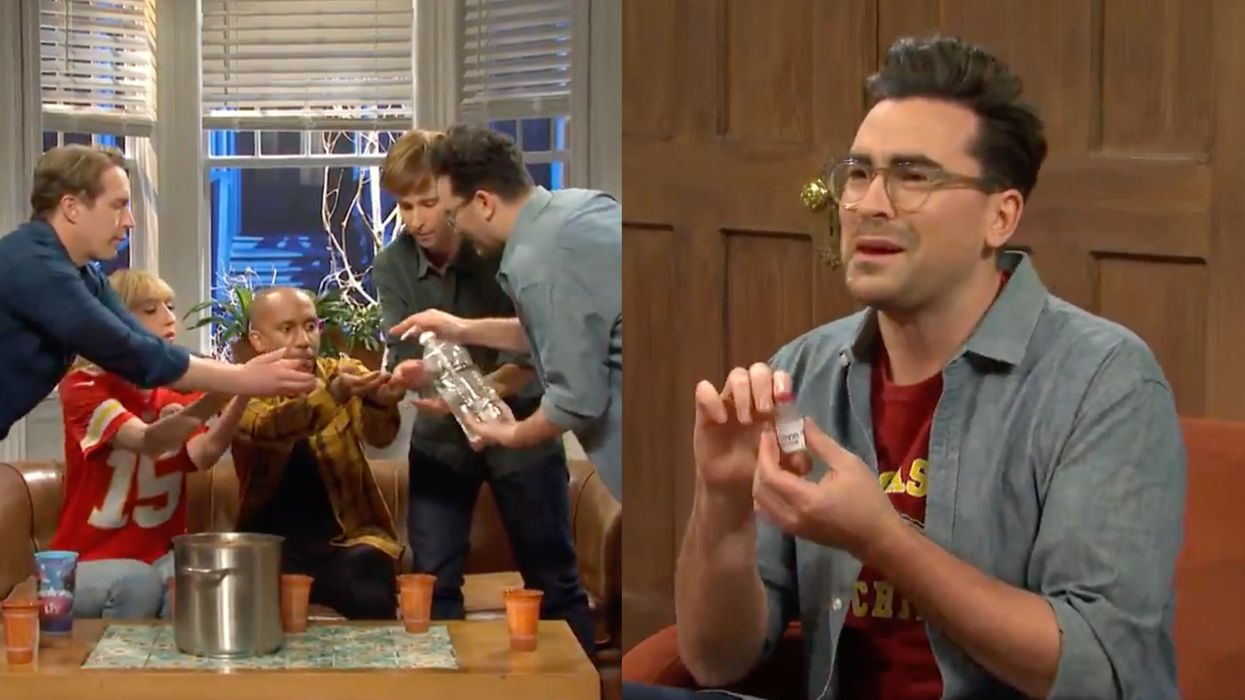 If you were unsure about how to celebrate the Super Bowl this weekend, Dan Levy’s SNL sketch is the perfect example of what NOT to do!

During the Canadian star’s Saturday Night Live (SNL) hosting debut on February 6, he starred in a four-minute skit about enjoying the Super Bowl during the pandemic.

Editor's Choice: Dan Levy Made His ‘SNL’ Hosting Debut & His Dad Showed Up To Surprise Him (VIDEO)

The sketch focuses on a group of five friends, including Schitt’s Creek’s Dan Levy, who have met up to enjoy the annual sporting event.

While the group all claim to have been following public health advice and being “super safe,” they also reveal that they’ve still been meeting up with friends, going to work, eating out and going to wrestling club with “20 to 30 really nice guys.”

It doesn’t take long for their face masks to come off, either!

“We deserve this!” the group says, as they continue to reassure each other that they’ve been “doing everything right.”

The tongue-in-cheek skit becomes gradually more chaotic, with the friends eventually eating chilli with their hands when the host doesn’t want to share utensils “because of COVID.”

It ends with the group realizing their sense of smell and taste have disappeared — a common symptom of COVID-19.

In addition to this hilarious sketch, Levy also stars in parodies set in Universal Studios Orlando and at a wedding.

During his opening monologue, he described the opportunity to host SNL as an honour and even received a surprise visit from his dad.

If you've already binged the Friends reunion special eight or nine times and you're desperate for more content, you might be devastated to hear that, in another universe, you might've been watching a spin-off starring Paul Rudd.


"See! He's her lobster." Rumours that Jennifer Aniston and David Schwimmer are dating are swirling on the internet and, naturally, many Friends fans are freaking out on social media.

Talk that a possible romance could be brewing between the famous duo began circling after Friends: The Reunion, during which real-life Rachel Green and Ross Geller admitted they'd previously had a crush on one another.

"We have to care about more than just ourselves here," she said.

After revealing that she's no longer friends with some people over vaccinations, Jennifer Aniston is defending her decision and shedding light on the reason why she made that choice.

Aniston shared an Instagram post by online publication Oprah Daily, which discussed her comment that she has cut people out of her life who didn't disclose their vaccination status. She then posted a screenshot of a response to her comment, which read, "But if she's vaccinated she's protected correct? Why be worried about unvaxxed around her?"

They called the 'Friends' star a "comic genius."

Netflix star Mae Martin recently had the opportunity of a lifetime for most Friends fans — working with Lisa Kudrow.

Martin is the star and co-writer of Feel Good — the second season of which was released on June 4 — where Kudrow plays the character of their mother, Linda.