They've been calling each other out for several months.👇 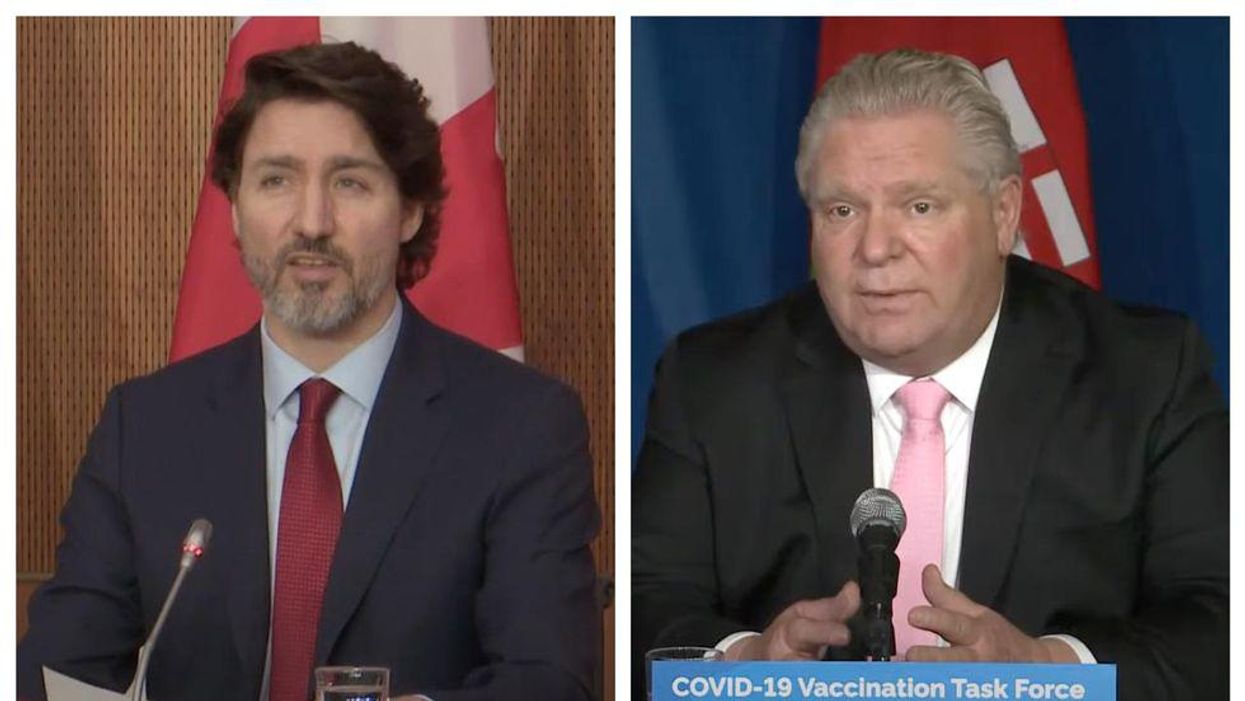 Over the past couple of months, Justin Trudeau and Doug Ford's relationship seems to have taken a bit of a hit.

From criticizing each other on social media, to sending strongly-worded letters, to making discreet digs at press conferences, the prime minister and the premier of Ontario can't seem to stop publicly roasting one other.

If you were wondering what — or who — started this mini political feud, here's everything you need to know:

"Do the right thing"

Back August 2020, the relationship between Justin Trudeau and Doug Ford seemed pretty solid.

During a press conference together in Brockville, Ford praised Trudeau for doing an "incredible job as prime minister" during the COVID-19 pandemic, while the PM described the Ontario leader as a "particularly" good friend.

However, just months later, Trudeau appeared to take a shot at Ford when he publicly urged provincial leaders to "do the right thing" and enforce tighter COVID-19 restrictions.

It came just days after the premier suggested he wanted to scrap travel restrictions in Ontario, regardless of whether or not the federal government approved.

This prompted a pretty strong response from Ford, who warned the PM to stay out of matters that fall under provincial jurisdiction.

"We don't need the nanny state telling us what to do. We understand our provinces," he said. "[Trudeau would] have a kickback like he's never seen from not just me, from every single premier, that just wouldn't fly."

By the end of March 2021, the Ontario premier wasn't hiding his opinions on the prime minister's performance during the pandemic.

He accused Trudeau's government of "[dropping] the ball majorly" when it came to the COVID-19 vaccine rollout in Canada and described Ontario's supply as "a joke."

However, Trudeau fired back days later by saying "one of the easiest things to do is to try and point fingers and deflect."

In April 2021, the duo began arguing about Canada's travel restrictions.

On several occasions, Ford called on Trudeau to tighten rules at the border to protect against COVID-19 variants of concern.

However, Trudeau hit back by describing Ford's actions as "personal attacks" and accused him of failing to follow up on his requests for change.

When Ford sent Trudeau yet another letter on the issue, Public Safety Minister Bill Blair backed up the PM and told Ford to "look at his data" and "listen to his health experts."

The Liberal leader also fired back again, calling out the Conservative premier for "playing politics."

It was Trudeau's turn to take a shot in June when he made a discreet dig about Ford's handling of the pandemic.

"Ontario has really struggled with this pandemic from a political level," Trudeau told a group of students on June 4.

He described the provincial government as being "somewhat uneven in its responses" to COVID-19 and accused officials of playing politics.

Trudeau added that while "the pressure is mounting" on the Ontario leader, he won't pick a fight with him.

Doug Ford has yet to respond.